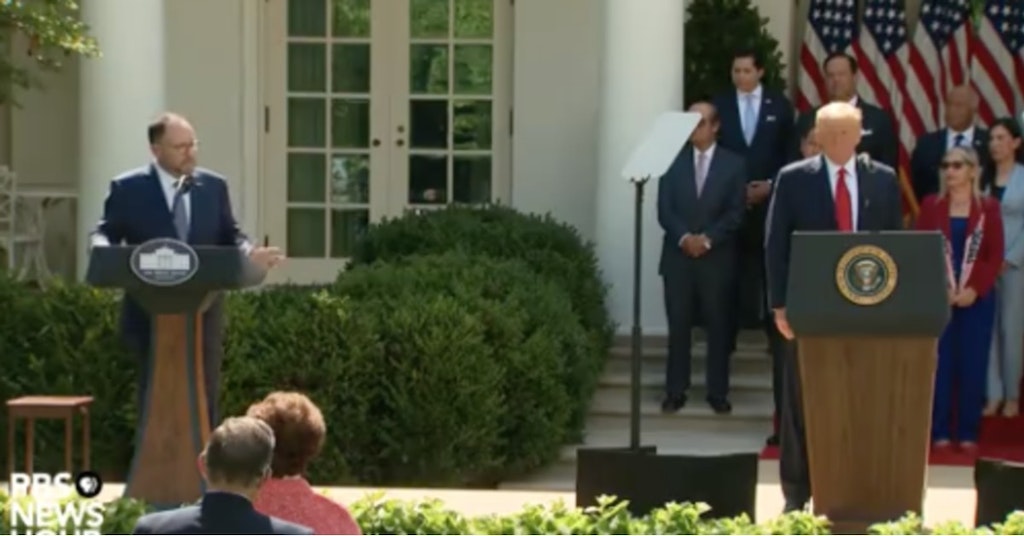 Popular Latinx food company Goya is being hit with a widespread boycott after the company’s CEO lavished Donald Trump with praise at a Hispanic Prosperity Initiative event in the White House Rose Garden. CEO Bob Unanue encouraged listeners to pray for Trump and went as far as saying that the nation is “blessed” to have him as a leader.

“We all truly blessed, at the same time, to have a leader like President Trump who is a builder,” he said.

The CEO of @GoyaFoods is at a White House event saying we're
"blessed to have a leader" like Trump.

You think they’re going under? I see a new Karen every day spouting off in a Trader Joe’s who will gleefully buy the beans. Don’t worry about fucking GOYA.

Unanue spoke about his grandfather, who founded the company as a Spanish immigrant who had very little to his name, and compared this to Trump, who has seen several of his businesses go bankrupt after receiving millions of dollars from his father.

People were quick to express their displeasure and announce intention to boycott the brand online, pointing out how Trump targeted Latinx people with racist rhetoric.

How can a company marketed to the latin community support someone who has made such a show of hating us? Boycotting Goya saddens me but I cannot give my money to you any longer.

No more Goya in our house. I like companies that don’t support racist deportation policies or keeping children in cages. Adios!

Blessed to have Latinx babies in cages hell no! #BoycottGoya pic.twitter.com/tFWT5oKMyx

In addition to everyday shoppers, multiple Latinx community and political leaders called for a boycott of the brand, including former presidential candidate Julián Castro and current House Representative Alexandria Ocasio-Cortez.

.@GoyaFoods has been a staple of so many Latino households for generations.

Now their CEO, Bob Unanue, is praising a president who villainizes and maliciously attacks Latinos for political gain. Americans should think twice before buying their products. #Goyaway https://t.co/lZDQlK6TcU

Oh look, it’s the sound of me Googling “how to make your own Adobo” https://t.co/YOScAcyAnC

Following a flood of public disapproval, Unanue went on Fox News to say that he would not be apologizing and claim that the boycotts are “suppression of speech.”

To be clear, boycotts are a form of speech, and only the government can suppress one’s freedom of speech, not the public.

Meanwhile, people are posting their own recipes for common Goya products.

My Puerto Rican mother in law’s recipe for Adobo Seco:

Mix it all up, use it just like Goya Adobo, only it’s better because it doesn’t have any TCP.