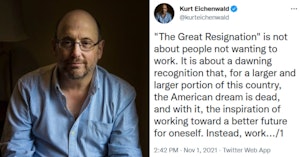 Author Outlines The Reason Behind The Great Resignation: ‘The American Dream Is Dead’

Politicians and pundits have continued to be baffled by what many are calling “The Great Resignation” — the ongoing phenomenon of people quitting their low-paying, undervalued jobs in vast numbers and refusing to return even when the extra unemployment benefits from 2020 ended. Surveys have shown that those who thought people were staying home purely for the money were wrong, as month after month, people continue to quit and leave a number of restaurants and other service shops understaffed.

Some have countered the idea that businesses desperately need workers by applying to hundreds of jobs themselves and getting very few responses, but there’s no doubt that a movement has arisen questioning whether work in and of itself is any kind of virtue, especially when you’re treated like garbage during every minute of it.

In a recent Twitter thread, author Kurt Eichenwald theorized that younger generations no longer have any faith in the idea of “the American dream” because for so many, it’s far out of reach and promises to stay there.

“‘The Great Resignation’ is not about people not wanting to work,” Eichenwald writes. “It is about a dawning recognition that, for a larger and larger portion of this country, the American dream is dead, and with it, the inspiration of working toward a better future for oneself.”

The idea of the American dream, which has been a phrase used since at least the 19th century, came to be known in the 20th century as a simple formula for success and happiness — get a job, work hard, buy a house, have a family, enjoy life, retire, and die in peace. Unfortunately, today’s younger generations have increasingly found themselves stuck on step one and two with no way forward.

“Instead, the greed culture has turned work for millions into just a means of survival, with wages stagnant, healthcare unaffordable, insurance treated as a luxury, paid free time an impossibility, children unaffordable, homes a dream.”

With its Calvinist Christian background, the U.S. in particular has maintained a culture that believes hard work both creates and is a sign of virtue, and that too much rest or “idleness” is basically a sin. This idea has been exploited by the rich and many politicians, particularly those who do little work themselves, to try and shame people into continuing to work themselves to the bone while systematically stripping away any real, tangible reason to do so.

According to Eichenwald and many young people, the public is now rejecting the notion that a lifetime of hard labor for basically nothing is a good thing.

“Many young people see nothing but 40 years of the same, further enriching the obscenely rich. This system has taught people how to survive without, because they don’t believe they will ever have.”

Eichenwald points to phenomenon such as Walmart teaching its employees to apply for food stamps instead of paying them enough to buy food to explain much of the growing cynicism about the system. When years of hard work still leaves people with nothing, still unable to afford the basics, an increasing number of people saying “screw this” seems like an inevitability that capitalists just don’t want to see coming.

The author puts much of the blame for this on the Baby Boomer generation, accusing them of sucking up resources while allowing basics like the education necessary to get most decent jobs to be loaded up with the promise of massive, lifetime debts.

He further attacks well-off Boomers and rich people in general for doing nothing about this other than pausing to “sneer at them when they talk about how their terrible wages and horrible debt make home buying etc. impossible.”

Eichenwald pointed to the example of the National Security Advisor under former President Ronald Reagan, whom he interviewed decades ago only to find out that the man had merely a high school education, while today nobody could dream of working in any corporate office without a $50,000 college degree, at least.

“But I will bet anything, to be the social media voice at Wendy’s, no matter how funny you are, you have to be a college graduate with internships in social media etc etc.”

Eichenwald finishes by putting the idea that anyone has ever wanted to work in any way that we now think of the term “work” to bed and laying out the simple fact that if companies want people to work for them, they have to offer incentives to make that happen. Whining about it won’t, in fact, get anything done.

“People never wanted to “work.” They wanted to invest their effort toward living a better life. And if work doesn’t do that, if work merely makes life worse to people who have been taught how to survive without wages so that McDonald’s and Walmart et al can shift their wage costs onto taxpayers, then a Great Resignation was inevitable.”