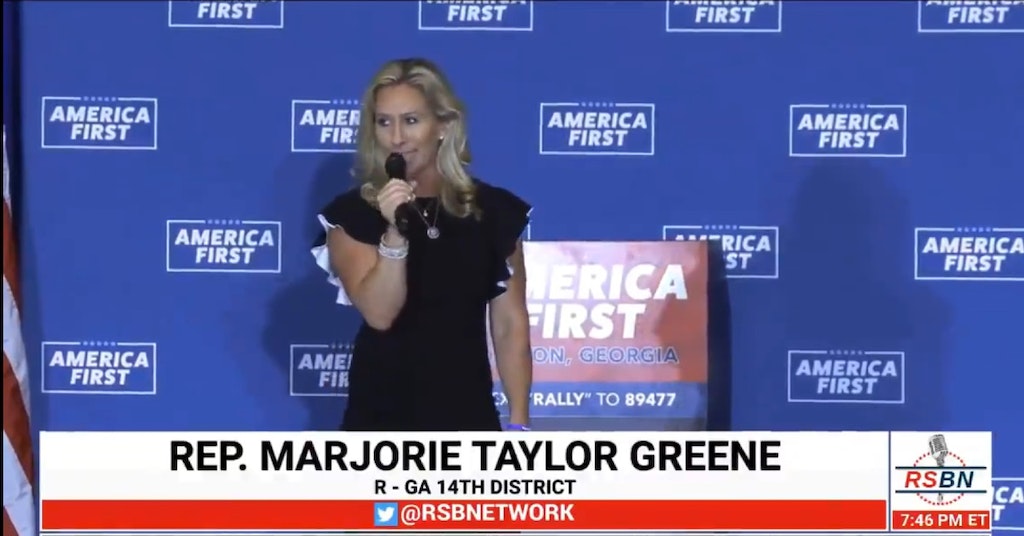 Here comes Rep. Marjorie Taylor Greene with her racism of the day, this time breaking out the world’s worst “Mexican accent” in order to make the claim that drug cartels within the country “love the Democrats.” Greene was back in her home state of Georgia for an “America First” event (a slogan popularized by the KKK) when she was filmed attempting the accent, which she should not have done regardless but that came out so badly that even the MAGA crowd she was talking to didn’t laugh until she admitted it was terrible.

“The cartels love the Democrats,” she said. “They’re down there, they’re like this, ‘We’re making a lot of money off of Biden, Joe Biden.’ That’s my really bad Mexican accent. Oh, they love them, they love them. They are raking it in.”

Greene was attempting to make the argument that Biden’s rescinding of Donald Trump’s cruel “remain in Mexico” policy and once again allowing people seeking refugee status to enter the U.S. is causing an increase in drug and human trafficking at the southern border. Republicans like Greene have produced no evidence to support this, but it’s great scaremongering material, so they keep jumping on the line.

The far-right congresswoman has done little to nothing to avoid accusations of bigotry during her time in office. Just last week, she was resoundingly criticized for comparing mask mandates and “vaccine passports” to the Holocaust and only managed to defend herself by claiming that she was simply comparing these public health efforts to the time just before the Holocaust happened.

This bumped right up against the Republican party’s attempts to paint any criticism of Israel as antisemitic, prompting House Minority Leader Kevin McCarthy to publicly rebuke her and earning the ire of far-right pundit Ben Shapiro.

In spite of the fact that people have come to expect this kind of bigotry from Greene, having to hear her attempt a non-white accent of any kind has produced a whole lot of cringe.