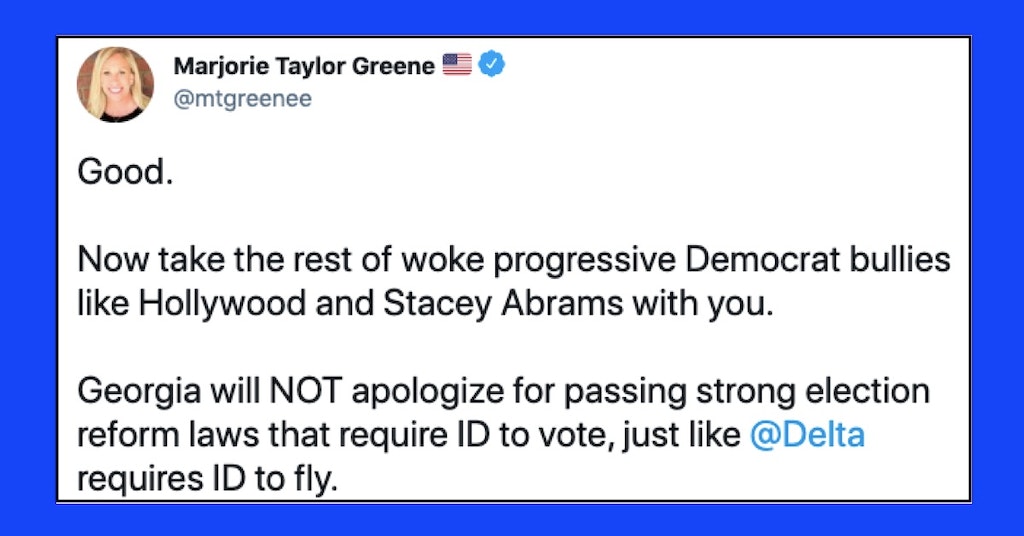 On Friday, Major League Baseball Commissioner Robert D. Manfred, Jr. announced that the organization would be moving their All-Star Game from Atlanta, Georgia, in response to new anti-voting laws passed by the Republican-controlled state legislature. The laws make it much harder to vote absentee, and also make it illegal to offer anyone waiting in line water or food.

“Over the last week, we have engaged in thoughtful conversations with Clubs, former and current players, the Players Association, and The Players Alliance, among others, to listen to their views. I have decided that the best way to demonstrate our values as a sport is by relocating this year’s All-Star Game and MLB Draft,” Commission Robert D. Manfred, Jr. said in a statement.

“Major League Baseball fundamentally supports voting rights for all Americans and opposes restrictions to the ballot box,” it continued. “In 2020, MLB became the first professional sports league to join the non-partisan Civic Alliance to help build a future in which everyone participates in shaping the United States. We proudly used our platform to encourage baseball fans and communities throughout our country to perform their civic duty and actively participate in the voting process. Fair access to voting continues to have our game’s unwavering support,.”

There’s been considerable backlash against the MLB from conservatives, even though until recently they have worshipped baseball as being as American as apple pie. I’m sure they will be turning against baked treats soon. In other news, Georgia Representative Marjorie Taylor Greene, best known for her associations with QAnon and harassing gun violence victim David Hogg, says it’s “good.”

“Now take the rest of woke progressive Democrat bullies like Hollywood and Stacey Abrams with you,” she continued, then told the MLB to “stick to baseball.”

Greene says and does a lot of stupid things for attention, but celebrating losing out on a bunch of money for her state because of their shameful voter suppression laws is not getting a lot of support:

The truth is Marjorie Taylor Greene is much more invested in her own agenda than in what’s good for the state she represents.