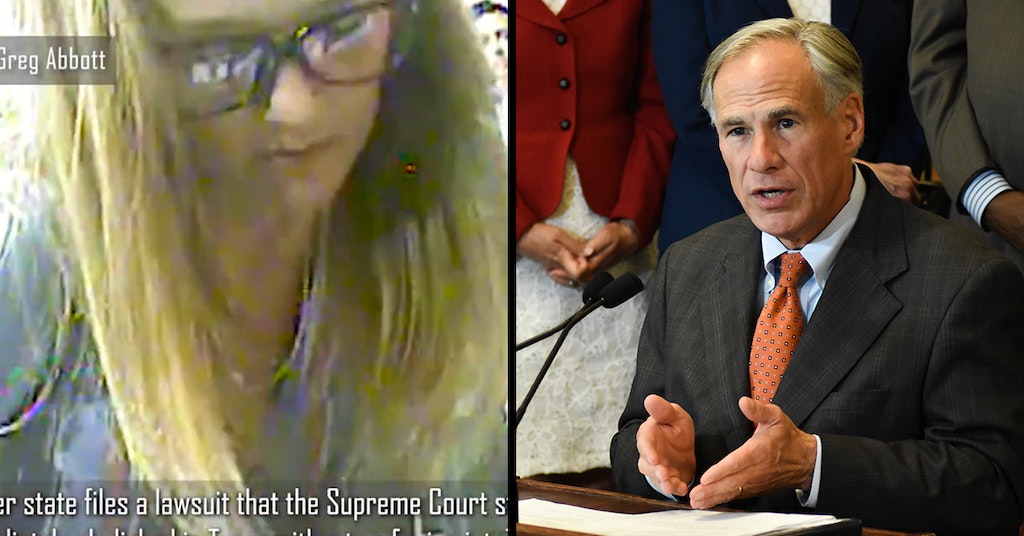 There’s no question in most people’s minds that what Texas did in outlawing abortion after six weeks of pregnancy and allowing lawsuits against anyone who helps a pregnant person get one later than that is the state’s attempt to outlaw abortion entirely. But one clever journalist got Governor Greg Abbott on record basically saying as much.

Lauren Windsor went to a Republican event this week that gave her a small amount of face time with Abbott, and she took full advantage. Her companion clandestinely recorded as she went up to the governor and pretended to be a big supporter chock full of conservative values.

“We want to thank you so much for all that you’re doing to defend the unborn,” Windsor told him. “And, you know, we’re just wondering what more can be done until Roe v Wade is not the law of the land anymore. Can you do something about morning-after pills and birth control? ‘Cause I think that it’s destroying the fabric of our society, giving women incentives to be promiscuous.”

Abbott was all too eager to discuss his record of stripping away rights from people who need them, and informed her that he actually already signed two laws that go a long way towards that end goal.

“[One] prohibits mail-order abortion pills from being sent. The other is maybe the most important. It’s called the trigger bill. What it means is that if any other state files a lawsuit that the Supreme Court strikes down Roe v Made, abortion is immediately abolished in Texas without us [going into] session,” he explained. “So basically, we’ve outlawed abortion in Texas.”

From there, Windsor tried pushing him further to get his thoughts on making morning-after pills and birth control illegal as well. Abbott reiterated what he’s already done regarding mail-order abortion pills, and the person recording specifically inquired as to whether over-the-counter birth control could be outlawed as well, which the Texas governor seemed receptive to.

Despite no one being surprised about any of this, getting Abbott to admit on camera what he was doing with his garbage fetal heartbeat law still felt like a tiny victory.

But mostly, it stoked existing fears about where this dark road could be heading if Abbott and his Republicans are allowed to continue.