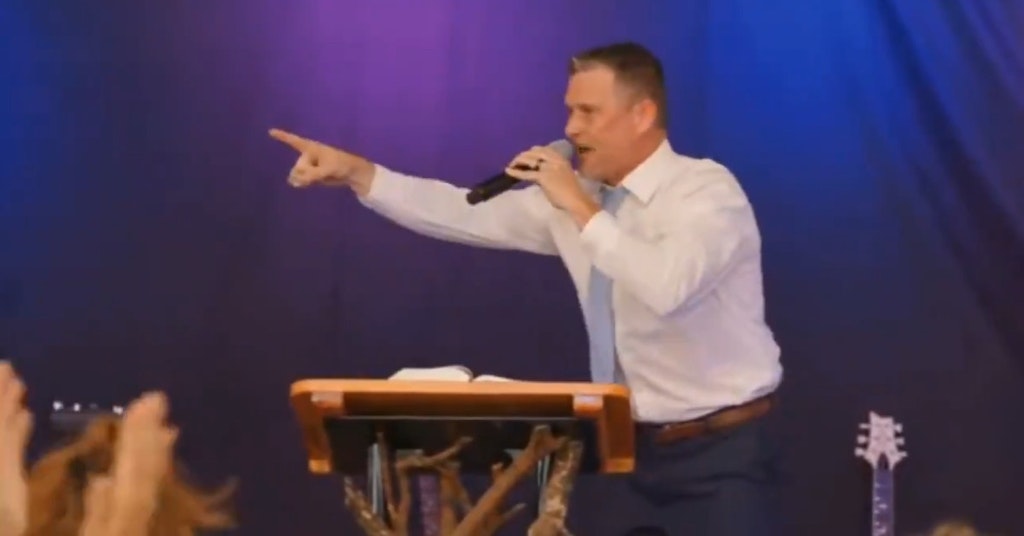 Watchdogs are beginning to raise the alarm that Evangelical Christian churches in the U.S. appear to be actively adopting QAnon talking points without saying they’re QAnon after notorious Baptist pastor Greg Locke performed a sermon about underground D.C. pedophile tunnels.

In his rant calling both President Joe Biden and Vice President Kamala Harris “demons,” he managed to go so far as calling everyone’s favorite guy Tom Hanks a pedophile while claiming that Donald Trump is the rightful president of the United States.

“I don’t care what you think about fraudulent ‘Sleepy Joe,’ he’s a sex trafficking, demon-possessed mongrel, he’s of the left, he ain’t no better than the Pope and Oprah Winfrey and Tom Hanks and the rest of that wicked crowd God is going to bring the whole house down!” Locke said. “He is going to burn the whole thing to the ground, he’s going to expose all these bunch of pedophiles. I’m telling you he’s going to expose Kamala Harris for the Jezebel demon that she is.”

The idea that Democrats are in league with Hollywood to operate an underground child-trafficking ring is older than QAnon, reaching back for decades in some form within fringe right-wing conspiracy theory groups. QAnon picked it up as part of its larger network of conspiracy theories, but the original point of the “movement” was claiming that Donald Trump is a savior figure who is going to overthrow all the bad things somehow magically from within in government.

QAnoners have been pushing the idea that Trump is still secretly president and that the Biden administration is working out of a studio in Hollywood or somewhere since he left office after losing the 2020 election, saying that he will at some point launch his plan and overthrow Biden and the Democrats. Multiple deadlines for this supposed event have come and go with nothing happening, but the latest date seems to be sometime in August if the MyPillow guy Mike Lindell is to be believed.

Locke seems to have taken up this idea as well without explicitly mentioning QAnon in his sermon, though he does repeat a statement he alleges comes from HBO: “‘Y’all bunch of Q’s.” However, this might refer to some church weirdness we’ve not familiar with.

If Locke is to be believed, the vast majority of U.S. residents as well as almost everyone else in the world is smoking a lot of dope in a lot of mom’s basements. As funny as that image may be, many are concerned that the merging of QAnon conspiracy theories and the U.S. Evangelical right is a recipe for disaster.