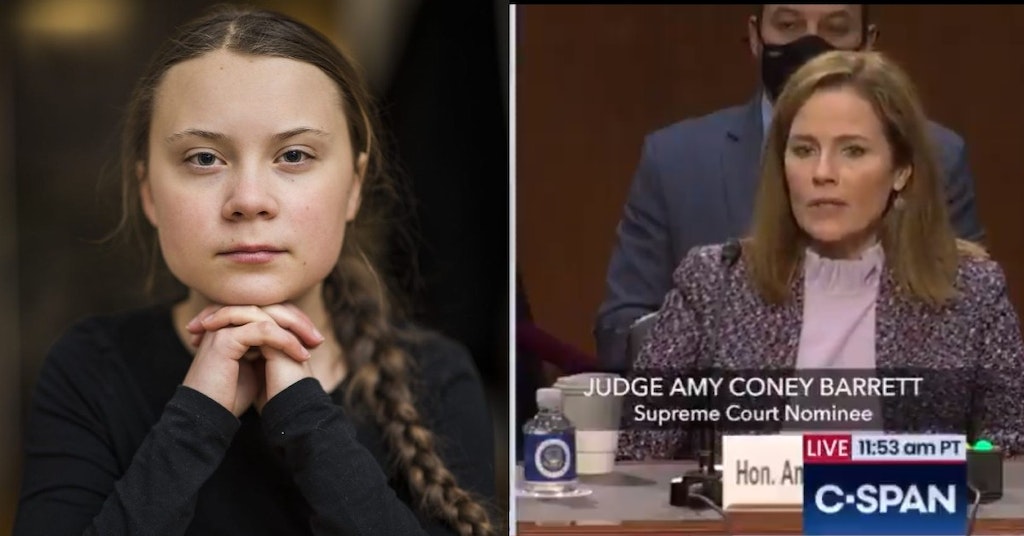 
The confirmation hearings for Supreme Court justice nominee Amy Coney Barrett have not been nearly as entertaining as Donald Trump’s town hall with NBC, with Barrett deflecting most of the questions posed to her by claiming she can’t answer them. When it comes to her opinion on anything from abortion rights to the upcoming election, she refused to answer on the basis that she’s about to become a member of the court that issues the final word on these exact matters.

This kind of attitude extended to the issue of climate change, which could easily make its way to the Supreme Court again as its effects worsen and oil tycoons do everything they can to resist the transition to clean energy sources. Yet somehow, Barrett doesn't see that in her future.

"I’m certainly not a scientist, I’ve read things about climate change. I would not say I have firm views on it," she said when questioned on the topic.

Famed youth climate activist Greta Thunberg had something to say about this, particularly on Barrett's treatment of the issue like it's up for debate.

"But understanding and knowing their existence really makes life in the 21st century so much easier."

After gaining international attention for her solo school strike to try and inspire adults to do something effective about climate change, Thunberg became just as famous for her brief and effective Twitter barbs. She refuses to entertain any notion the crisis might not be real or a serious and severely deadly problem, but the Supreme Court nominee continued to refuse to say whether she thought it exists at all.

“I will not do that, I will not express a view on a matter of public policy, especially one that is politically controversial," Barrett deflected once again.