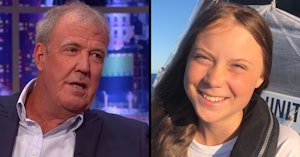 Former Top Gear and current The Grand Tour star Jeremy Clarkson attacked 16-year-old climate activist Greta Thunberg in a column for U.K tabloid The Sun, calling her a “spoilt brat” and telling her to “be a good girl” and “shut up.”

In response, Clarkson’s own daughter Emily pretty clearly subtweeted him while retweeting much more positive comments about Thunberg by comedian John Bishop.

Wouldn’t it be nice if all middle aged blokes could talk to and about Greta, the ballsy af teenager out there changing the world, like this ❤️???? https://t.co/WQuAvkwISV

Jeremy Clarkson had the nerve to pen a “column” directly yelling at Thunberg for daring to fight for action on climate change and rightfully dragging adults across the world for failing to do so in spite of many decades of warnings from scientists. In spite of all the bad press directed at other fully grown individuals who have attacked this passionate and desperate child who doesn’t see a future for herself, Clarkson wrote things like this:

“Many thousands of people who you had the temerity to blame this week are trying to do exactly what you want. So be a good girl, shut up and let them get on with it. And no. You cannot stay out past ten. And you cannot go out in a skirt that short.”

Nice bit of misogyny thrown in there for good measure.

Not sure Jeremy Clarkson, who was 55 years of age when he was fired for beating up a producer on Top Gear because there was no hot food, should be calling anyone a spoilt brat. pic.twitter.com/L5fnnfWKXH

The former Top Gear host was fired and ultimately caused the cancellation of the beloved program because he physically attacked one of the show’s production staff after he was offered soup and cold cuts instead of steak because the chef at the hotel he was staying at went home.

Prior to this, he was frequently in trouble for making bigoted and generally offensive comments, including using the n-word, making Nazi jokes, making insensitive comments about people with disabilities and suicide, and calling a former British Prime Minister the c-word.

Amazon later signed him and his co-hosts to make The Grand Tour in the U.S., though we’ll see how long that lasts while Jeremy is still like this.

Clarkson later responded to his daughter directly on Twitter, spouting more misogyny which Emily promptly threw right back into his face.

A woman doesn’t need to be polite to make a point ????

You have to be saying something really bad to get so brutally and publicly slammed by your own kid. Not to mention everyone else.

So king of bigots Jeremy Clarkson Brands Greta Thunberg A ‘Spoilt Brat’? Why do middle aged men find Greta so frightening? I wish these over privileged men would look beyond their own life span and think about future generations! #ExtinctionRebellionhttps://t.co/RE7tDsMQXN

Greta got upset because the world is burning.

Clarkson once punched his producer in the face because his hotel had stopped serving hot food ‘too early’.

I don’t think anyone needs a lecture on emotional maturity from this shrieking manbaby.https://t.co/YC7NZv36kv pic.twitter.com/jmnHHgnOTj

Jeremy Clarkson is the latest middle aged Gammon to have a pop at a young girl who wants to save the planet by calling her a "spoilt brat".

This is the same Jeremy Clarkson who was sacked by the BBC for punching a producer in the face because his food wasn't quite right.

But *of course* the weird crusade of middle-aged men against Greta Thunberg had to culminate with Clarkson. He's like the final boss in a video game filled with feeble, middle-aged bores threatened by change. Greta slays them all. https://t.co/fvzLH9KV9N

Another old man intimated by this brilliant young woman. Jeremy Clarkson brands Greta Thunberg a 'spoilt brat' who should 'shut up' https://t.co/rdUfjTJZs8 via @MetroUK

Jeremy Clarkson calling Greta Thunberg a "spoilt brat" really is a stellar case of the pot and the kettle.

WTF old dodgy sparkplug beating up a kid on a mission to save the planet
Really fucking clever sparkplug really clever https://t.co/hWKvcldwsy

Is he really worth the trouble, Amazon?