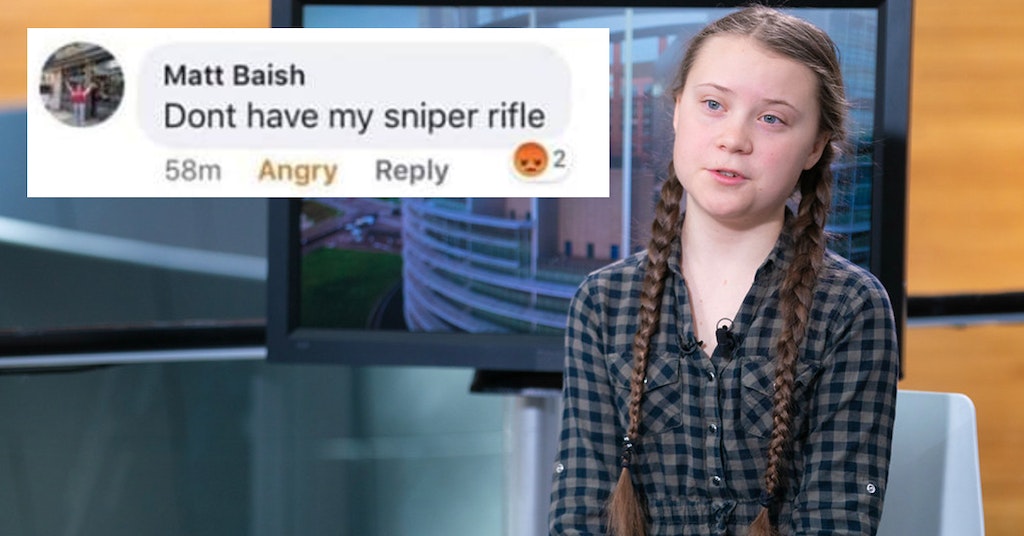 A teacher named Matt Baish in Des Moines, Iowa, is on leave for making a “joke” on facebook about bringing his sniper rifle to an event in Iowa City featuring teen climate activist Greta Thunberg.

The original comment and Baish’s page seem to have been deleted, according to USA Today, but it was screenshot and posted to a Waterloo Community School District Facebook page.

Hello, adults. Just checking in to ask, what in the hell is wrong with you? If you’re a grown man who sees a teenage girl advocating for the planet and your thoughts go towards pointing a gun at her, you need to seek help. And if you’re a teacher, I don’t even know what to say. Why are you allowed to work with kids, I guess?

Baish might not be a teacher much longer. Waterloo Schools director of school and community relations, Tara Thomas, sent an email to teachers and students saying he’d been put on leave Friday:

“We are aware of a social media situation involving one of our employees,” the statement said. “The nature of the content shared rose to the level of putting this employee on administrative leave pending an investigation. We appreciate your patience as we sort through the details and thank you for respecting the process.”

Law enforcement is also investigating Baish, as threats of violence against children are taken pretty seriously. Thomas shared the school’s social media policies in her email as well, which say employees can face dismissal or suspension for posting anything that “would be defined by a reasonable person as obscene, racist, or sexist,” “promotes illicit, illegal, or unethical activity” or “violates the district’s affirmative action and/or bullying and harassment policies.”

Baish really managed to hit a bunch of those in just a few words.

Not everyone agrees on what is causing climate change, but Thunberg attracts a particularly horrible set of trolls, especially amongst bitter older men. They can’t stand to see a young girl shine and have all sorts of conspiracy theories about her. Thunberg has said herself that paying attention to her haters just takes energy away from her message, which is that climate destruction has to be stopped.

What’s especially wild about Baish is that he is a SCIENCE teacher. So either he doesn’t actually know anything about science or he hates young women so much, he is ignoring it. Either way, it might be time for an early retirement.