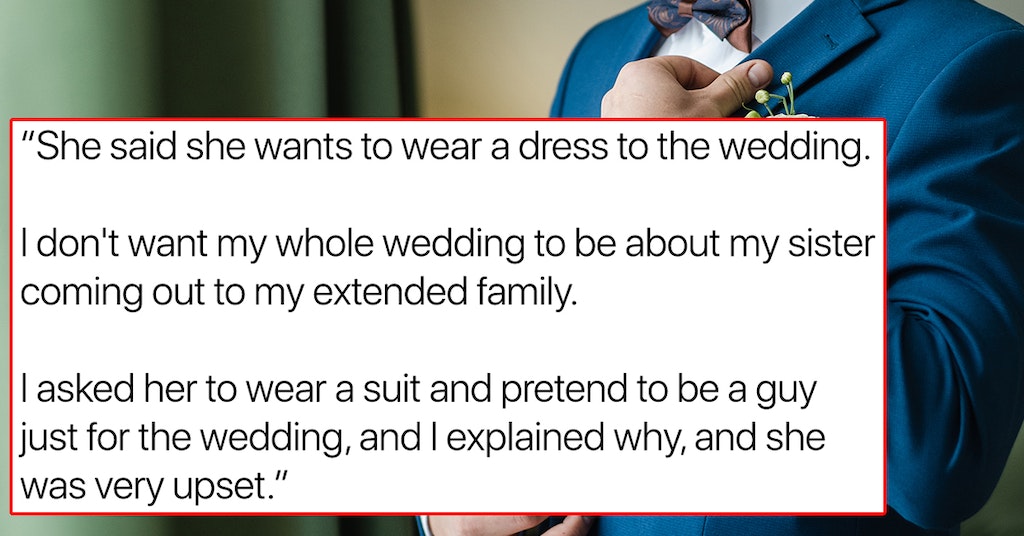 
Trans people are constantly under attack in the U.S. and abroad. Here, they’ve become one of the favorite targets of the GOP and conservatives who want to fight culture wars instead of dealing with more pertinent issues. If they’re not introducing bills that regulate where people can go to the bathroom, they’re trying to ban trans people from competing in sports.

Any right-thinking person can see these issues and say they support the rights of transgender people, but Redditor u/yellowwaterlily found that they had failed to support a trans person very close to them when it became an inconvenience.

Their story is titled, “AITA for asking my sister not to dress in a way that will cause drama at my wedding?”

The OP writes that his sister came out very recently, to immediate friends and family. She hasn’t medically transitioned, but she’s been growing out her hair and begun experimenting with new clothes and make-up.

After coming out, she began to talk about wearing a dress to the OP’s wedding, which is in about a month:

I didn’t think that was such a good idea because there are lots of people on my side of the family who she hasn’t come out to and who wouldn’t be supportive at all. There are also lots of very traditional people in my fiancee’s family who would have a huge problem with it.

I don’t want my whole wedding to be about my sister coming out to my extended family. Maybe that seems selfish, but I really think a wedding should be about the couple. I’m also concerned about people being openly rude or even aggressive to her.

I asked her to wear a suit and pretend to be a guy just for the wedding, and I explained why, and she was very upset. I do understand that it would suck to have to go back in the closet for a day, but I also think she hasn’t thought about how much it would suck to have people staring at her and possibly harassing her for being trans for the whole day.

I don’t think she really understands that it’s as much about her safety as it is about not having huge dramas at my wedding.

The OP wanted to know if he’d done the wrong thing by asking his sister to pretend to be his brother for a day instead of her authentic self.

The comments are kind of all over the place because there is a strong consensus on Reddit that absolutely NO ONE should interfere with somebody’s special day. A wedding is always about the people getting married, and it could potentially be scene-stealing for someone to “come out” during another person’s event.

There were lots of comments like that, but logic prevailed. Many more people pointed out that the OP should be concerned for the feelings of his sister, not bigoted transphobes. There is also theoretically plenty of time to discuss his sister’s transition with anyone they suspect might be negative about it and let them know bad behavior would not be tolerated.

One trans person even shared a story about showing up to a wedding as their “new” gender and said it might not be as big of a deal as he thinks. People come for a wedding and generally respect the wedding vibe:

On the bright side, it seems like all the comments got through to the OP, who added an update.

“I understand now just how crappy it was of me to just tell my sister to pretend to be a guy,” he wrote. “I thought it was like putting on a costume for a day, I understand now it’s more like going back into a prison for a day. I’m gonna say sorry and talk to her to come up with a solution together which is what I should have done to start.”

We love a story with GROWTH.