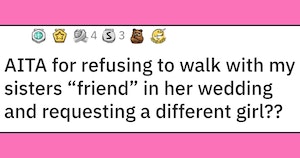 I kind of feel ANYONE making ANY demands over a wedding is 100% assh*le territory. Bride. Groom. Anybody. But I also really abhor the behavior I see in a lot of weddings, so my bar is looooow.

Which is why you should judge u/chabortoo, who recently asked Reddit:

“AITA for refusing to walk with my sister’s “friend” in her wedding and requesting a different girl?”

Title is weird. So is this whole situation I (27M) find myself in. I do think the backstory is important here. So my sister is getting married in November. We are really close and always have been. So I find this whole situation to be ever weirder. I’ve been asked to be a groomsman on her fiancé’s side. Me and him are cool and it was important to my sister that I’m included. I was really looking forward to it until I saw who I was paired with.

OP explains that his sister’s fiancé asked him to be a groomsman and he was really looking forward to it… until he saw his partner.

So two years ago I met this girl named Tara (26F) on a dating app. We started talking daily. FaceTimed a lot. Went on dates. We talked for over 3 months. And I felt like it was actually going somewhere. Well after one of the dates she completely ghosted me. Sent a follow up text but got nothing back. I won’t lie. I was really upset. I even talked to my sister about it.

Years ago, he met a girl who ghosted him after three months. He moved away, life moved on, but apparently Tara became friends with his sister in the meantime.

Well Covid hit and I moved away for a job. Come back to find out my sister and Tara are now friends? Apparently my sister got a new job. Tara recognized the last name. Reached out to her and they became friends. Such good friends in fact that she is now a bridesmaid and hangs at my parents house. And my parents know her? I found out they were friends literally 3 weeks ago. She never mentioned it to me.

OP asked about the ghosting and his sister said yes, that Tara had spoken with the sister about it, but the sister said the conversation wasn’t hers to share. Fair enough.

I asked if she knew it was the Tara I got ghosted by. And she said Tara had told her. But wanted to keep their conversations private.

But without sharing those reasons with OP, it seems that the bride & Tara partnered him with Tara.

Then a random text from Tara. Asking what I wanted to do for our entrance dance. I immediately called my sister. Who informed me that Tara and I would be paired up. Including the entrance dance. I asked why. I know many of her bridesmaids and she had to pair me with the one who ghosted me? She said she had her reasons. And Tara also asked for me specifically.

By keeping OP in the dark, they’re definitely making a weird move. And OP is right to not really be thrilled about having to collaborate with this woman.

I never responded to Tara and instead went to talk to my sister in person. Got the same answers. And this time she sounded offended??? that I asked for a different person. I told her how uncomfortable it made me. And she told me to stop overthinking. And just have fun.

OP explained that he was really hurt and this was a big deal to him, but if his sister didn’t get that and switch his partner, he’d just step down.

I said that she didn’t understand how hurt I was. She said she had an idea, but to just do it as her wedding gift. I told her I’d be stepping down from the wedding party. I’ll just go as a guest. She went apeshit. Saying I couldn’t do that. And she wanted me up there. I said fine then switch me to a different girl. She said she wasn’t going to.

So now OP is wondering if he’s in the wrong here. And I admit, I’m feeling like the answer is… not entirely?

So I told her I’d be dropping out. My parents are calling me an AH. But I don’t think I am. It’s a weird request and I’m not about it. AITA?