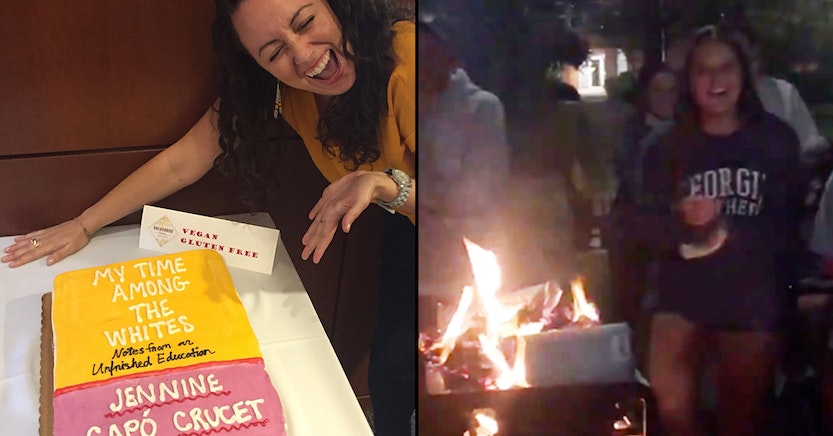 Capó Crucet, who is a New York Times contributing writer and an associate professor at the University of Nebraska, was giving a lecture touching on her award-winning book, which was required reading for some of the university’s First-Year Experience classes.

Make Your Home Among Strangers tells the story of a Cuban-American girl from Miami struggling to fit into the environment of white privilege she encounters at her prestigious New York college—but some students were not interested in hearing about white privilege.

They reacted with hateful rhetoric.

“I noticed that you made a lot of generalizations about the majority of white people being privileged,” said one student, according to the university newspaper the George-Anne. “What makes you believe that it’s okay to come to a college campus, like this, when we are supposed to be promoting diversity on this campus, which is what we’re taught. I don’t understand what the purpose of this was.”

“She came to our school and, the audience was predominantly white, and she came in and was attacking white people for an hour, putting all these stereotypes and generalizations on us,” one student told Buzzfeed. “Like all white people are privileged and racist.”

After her lecture, Capó Crucet tweeted that she encountered “aggressive & ignorant comments” during the Q&A but that she found “some very amazing, brilliant students” and was “legit worried for their safety.”

Also want to say: I met some very amazing, brilliant students at @GeorgiaSouthern tonight. Many of them were the ones disrupting the aggressive & ignorant comments during the Q&A. At the signing, we hugged & cried. I‘m happy to know them and also legit worried for their safety.

Most of the students who harassed Capó Crucet deleted tweets they wrote, but screenshots remain: 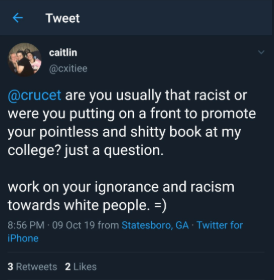 Looks like students are deleting tweets/accounts now (many clearly created for the sole purpose of harassing you). I hope the @chronicle and @insidehighered are paying attention and folks have been taking screenshots. And I hope @GeorgiaSouthern responds quickly and forcefully.

To continue the downward spiral, later that night, a group of students actually gathered on campus and lit Capó Crucet’s book on fire like they were playing Nazi Germany (where books that were considered “un-German” such as those written by Ernest Hemingway, Helen Keller, Karl Marx, Thomas Mann, Franz Werfel, and others).

This is what they posted and took down. This. I can barely look but we must. pic.twitter.com/p8il2LXUDd

so after our FYE book’s author came to my school to talk about it... these people decide to burn her book because “it’s bad and that race is bad to talk about”. white people need to realize that they are the problem and that their privilege is toxic. author is a woman of color. pic.twitter.com/HiX4lGT7Ci

Some enraged white people burning a book by a woman of color who criticizes white privilege proves her point @crucet https://t.co/ixO6vdfsPC

Capó Crucet shared news of the book burning on Twitter.

Students at @GeorgiaSouthern literally burning my novel. This is where we are, America. https://t.co/CxhjuaBYcX

And was met with some particularly vile responses.

Maybe that wouldn’t happen if you spoke about your book instead of dissing white people the entire time.

According to the school’s department of Writing and Linguistics, that evening some students actually WENT TO HER HOTEL and milled around outside.

The Department of Writing and Linguistics at Georgia Southern University is dismayed and disappointed by the uproar...

Many Georgia Southern University students and alumni were mortified at the behavior illuminated by the racist and bullying tweets and sickening book burning.

Today I realized how ignorant my fellow peers are and they really need to educate themselves.

I am so sad and sorry that this small group has made such a negative name for our school. Please know that I love your book and most of us do not share the same view as those who committed the horrible act.

To do this to any book is violent and petty. To do this to @crucet‘s is straight-up unfair. Jennine, thank you for doing the hard hard work of writing this book, and of talking with people–students especially–about it.

And some were just fine with it.

As an alumni of Georgia Southern, I’m disgusted how you perpetuated racism towards white students. White people don’t chose their skin color either. Making fun of white students who left bc they felt discrimated against. #bekind #stopspreadingracisthatred

“She really cares a lot about this work, and she’s extremely encouraging and enthusiastic about her students. At her essay collection launch she had three students who’d been in her undergrad class do readings before her – not grad students, but undergrads, all women, all marginalized in some way. She’s incredibly dedicated to creating space for voices that aren’t being heard enough, and she’s extremely nuanced – as anyone who reads any of her work would see.”

Capó Crucet was supposed to deliver another lecture on Thursday at the University, but it has been canceled due to “unforeseen circumstances.”

John Lester, Vice President for Strategic Communications and Marketing, said there is currently no plan for disciplinary action against the students involved.

“While it’s within the students’ First Amendment rights, book burning does not align with Georgia Southern’s values nor does it encourage the civil discourse and debate of ideas,” he added.