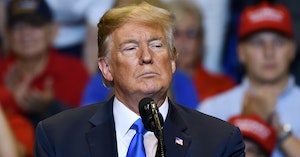 It’s hard to imagine what information would bring Donald Trump down, at this point. So much horrible secret stuff has come out about him—he was literally impeached for trying to strong-arm a foreign nation like some sort of mobster. What is there left to know about him that might actually make a dent in the opinions of his followers?

We might find out—if a group of anonymous hackers has their way.

The hackers are now claiming that they have additionally found info on Trump, and it’s so juicy they’re demanding $42 million to not blast it across the world. On their dark web site they wrote:

The ransom is now $42,000,000. The next person we’ll be publishing is Donald Trump. There’s an election going on, and we found a ton of dirty laundry on time.

Mr. Trump if you want to stay president, poke a sharp stick at the guys, otherwise, you may forget this ambition forever. And to you voters, we can let you know that after such a publication, you certainly don’t want to see him as president.

I already don’t want to see him as president, what else ya got?

Trump is not a known customer of Grubman, so only the firm and Trump himself know what this info could be or if it exists. The hackers did release a contract for Madonna’s World Tour 2019-20 to prove they have acquired private information from the 756GB  of documents. They had initially demanded $21 million to prevent releasing information on everybody, but on Thursday they upped the amount and specified Trump.

So, who are these people? Who knows! The main clues are the ransomware they used to break into the servers, called Revil or Sodinokibi, which steal everything, then trashes the victim’s network once it is downloaded. It appeared last April and has grown more popular in attacks on private businesses. It has been advertised on an underground Russian hacking forum, as the makers or organizers seek more elite hackers who know how to use it. Those who join are forbidden to use the code against Russian targets. Draw your own conclusions.

It’s unlikely that Trump or anyone at Grubman will actually pay up. A source at the law firm told Page Six, “[Grubman’s] view is, if he paid, the hackers might release the documents anyway. Plus the FBI has stated this hack is considered an act of international terrorism, and we don’t negotiate with terrorists.”

Damned if you do, damned if you don’t. Show us the dirt, hackers. Unless it’s the pee tape. Trump will probably steamroll right over it.