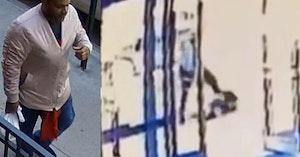 A brutal attack on an elderly Asian woman in New York City is the latest evidence of the uptick in anti-Asian violence in the United States since the pandemic began.

The 65-year-old was on her way to church when a seemingly random man assaulted her outside of an apartment complex in Manhattan. A security camera inside the building that managed to capture the incident showed the man kicking her at full force as she walked down the sidewalk, knocking her to the ground.

At that point, the man kicked her in the head multiple times before walking away, leaving the woman on the sidewalk. According to the NYPD, he also shouted racial slurs at her during the attack.

The woman was reportedly taken to the hospital after suffering “serious physical injury,” but is now in stable condition.

The attack itself is horrifying to watch, and the video revealed something else that has people outraged — three security guards looked on as the woman was being beaten from inside the apartment lobby and did absolutely nothing.

Actually, that isn’t true. They did one thing.

They shut the door on her.

While anger is primarily being directed at the perpetrator, the idea that people would stand by and watch someone get brutally assaulted without stepping in, calling for help, or even lifting a finger to do anything after the fact is also deserving of rage.

The Brodsky Organization, which encompasses the apartment building where the guards watched the attack, has released a statement condemning “all forms of discrimination, racism, xenophobia and violence against the Asian American community,” and has suspended the men who stood by doing nothing “pending an investigation in conjunction with their union.”

Meanwhile, the NYPD is still seeking information about the suspect.