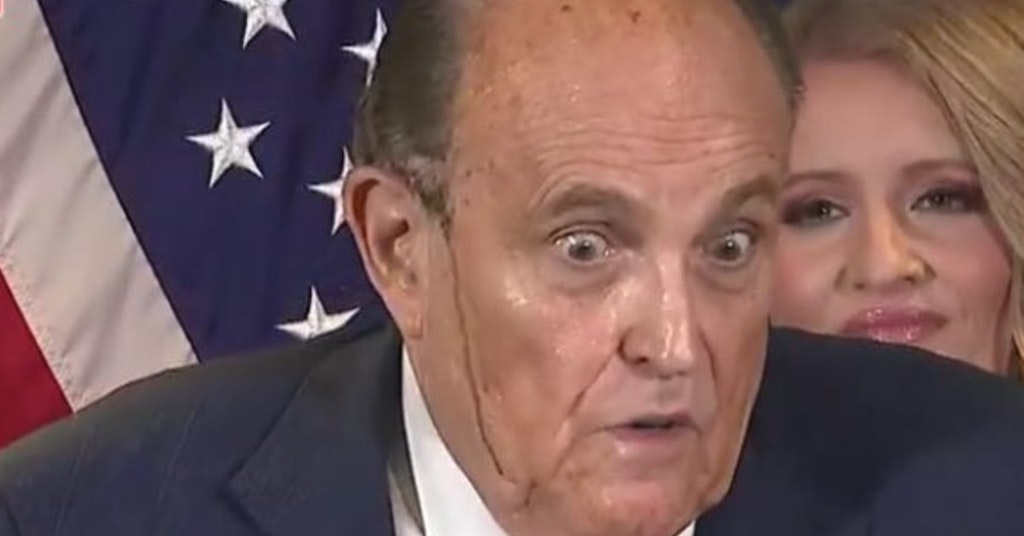 
Rudy Giuliani wasn’t looking too good Thursday at his regularly scheduled election fraud press conference where he began sweating to the point that it appears his hair dye (we’re hoping) was melting down his face. He also reenacted a scene from one of his “favorite law movies” My Cousin Vinny and called the entire city of Philadelphia corrupt in between the usual claims of election fraud without presenting any real evidence.

Giuliani, 76, might want to consider just letting his hair be gray, or simply lying down for a while.

While claiming that election observers were only allowed to watch from more than 60 feet away from the vote counters, Giuliani jumped on a completely unnecessary My Cousin Vinny reference.

"We could do like a, did you all watch My Cousin Vinny?" he said. "You know the movie? It's one of my favorite law movies because he comes from Brooklyn. And when the nice lady, who said she saw, and then he says to her, 'how many fingers do I got up?' And she says 'three.' Well, she was too far away to see it was only two. These people were further away than My Cousin Vinny was from the witness."

As he spoke, Giuliani spent a lot of time mopping up the sweat from his face as Twitter rushed to make jokes about his leaking hair dye. After a little over an hour, the Trump lawyer managed to connect Hugo Chávez, President Nicolás Maduro, and George Soros into an entire global conspiracy theory.

He's right, we have a hard time believing any of that.

George Soros in particular is brought up so much in right-wing conspiracy theories that just evoking his name like this is widely recognized and an antisemitic dog-whistle.

The entire press conference lasted about 90 minutes. Meanwhile, the Trump campaign has dropped yet another lawsuit in Michigan, which was announced in a statement put out by Giuliani. He also called a reporter who asked about why the campaign has dropped so many of its lawsuits around the election a "discourteous person" during this press conference.