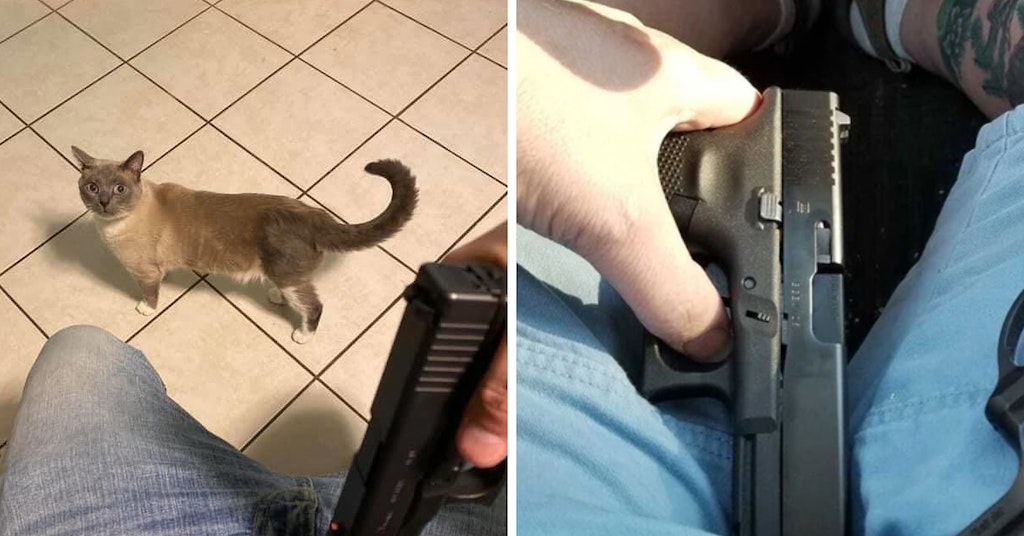 The number of bizarre niche cultures there are out there never ceases to amaze me, nor does the specificity of some of them. This is a story about people who have formed a community around pointing loaded guns at their nuts and then posting photos of it to Facebook. That’s it. If you guessed that one day this would end in some sort of horrible accident, you’re right.

Vice reports that on August 11th, a man posted a video on Facebook group “Loaded Guns Pointed at [B]enis” in which it appears that loaded 1911 handgun pointed as his nutsack fires. The video has since been deleted, but was captured and re-uploaded multiple times by other group members. He also apparently posted updates as he went to the hospital and then home.

“Hey [b]ois, I might have f—ked up,” he wrote, sharing a pic of his naked legs and blood on the floor, plus a towel stuff in his crotch. Vice reports a crumple copy of the constitution is also visible in the image.

“God’s caliber [.45] went through my scrotum, mattress, boxspring, and floor,” he updated everyone.

“Turns out it wasn’t a graze, that round went right the f—k through me,” he posted from the hospital. “What I thought were two graze wounds, turned out to be an entrance and exit wound.”

An admin for Loaded Guns Pointed at [B]enis told Vice that the shooter was okay even though he wasn’t responding to requests for comment. The group has been pretty supportive, even calling him “king” and celebrating his commitment to shooting his bits.

“[He] is 100% okay, actually went to work the next day,” the admin wrote in a Facebook message. “The reason we are calling him king is partially because the poor guy already shot himself, don’t think he needs to be chastised as well… I’m quite sure he’s learned his lesson without the entire world calling him an idiot.”

I’d like to say that understanding “why” these guys do this in the first place will make the whole story make sense, but it doesn’t really. In the gun community there are many types of people. One fairly common perspective is an emphasis on gun safety or “trigger discipline,” meaning you don’t point your gun at anything you don’t want to shoot and keep your finger off the trigger until it’s time to shoot it. This group is reacting against that in kind of an edgelord, troll way.

“[We] are sick and tired of being demonized as gun owners, and looped together with the alt-right just for owning guns,” a group admin explained. “We are sick of republicans (think NRA) telling us what to do with our property, and we are sick of being told that just because we like guns It means we have to be anti woman, pro life and pro trump.”

Okay, we get it. You’re pro shooting yourself in your own balls. Congrats. You did it.