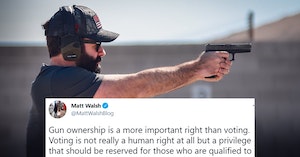 We know gun rights people really, really love their guns, but this is ridiculous. Far-right pundit and man who self-identifies as a “theocratic fascist” (and we will never stop pointing that out) Matt Walsh declared on Twitter that he thinks the right to own these deadly weapons is more important to than the right to vote.

In fact, he doesn’t seem to be too keen on the idea of equal voting rights for everybody at all.

“Gun ownership is a more important right than voting,” he tweeted. “Voting is not really a human right at all but a privilege that should be reserved for those who are qualified to do it properly. It should be easier to buy a gun than vote. But it isn’t.”

What kind of people would Matt Walsh considered to be “qualified” to vote “properly,” do you think?

This tweet, of course, comes right on the heels of the most recent high-profile mass shooting in the U.S., which killed 10 people in Boulder, Colorado. People like Walsh and the NRA wasted no time at all in jumping to encourage people to buy more guns, because surely this time will be when Democrats start showing up to the doors to take away their rights.

In reality, Democrats have once again proposed common-sense gun control found in all those other nations that don’t have constant mass shootings that would only keep guns out of the hands of certain people whom some might say were having a “bad day.”

Meanwhile, Republicans are working hard to pass bills in dozens of states that would make it more difficult to vote for people who don’t have the luxury of being able to miss work and travel long distances to stand in line all day. These people just so happen to overwhelmingly vote Democrat, and Republicans keep pretty much outright saying that they want to suppress the right to vote of these specific demographics.

“Democrats value as many people as possible voting, and they’re willing to risk fraud,” he said. “Republicans are more concerned about fraud, so we don’t mind putting security measures in that won’t let everybody vote — but everybody shouldn’t be voting.”

Walsh takes this to another level by denigrating the very right to vote that so many oppressed populations have had to fight tooth and nail to gain, and people who approve of those rights are not pleased.