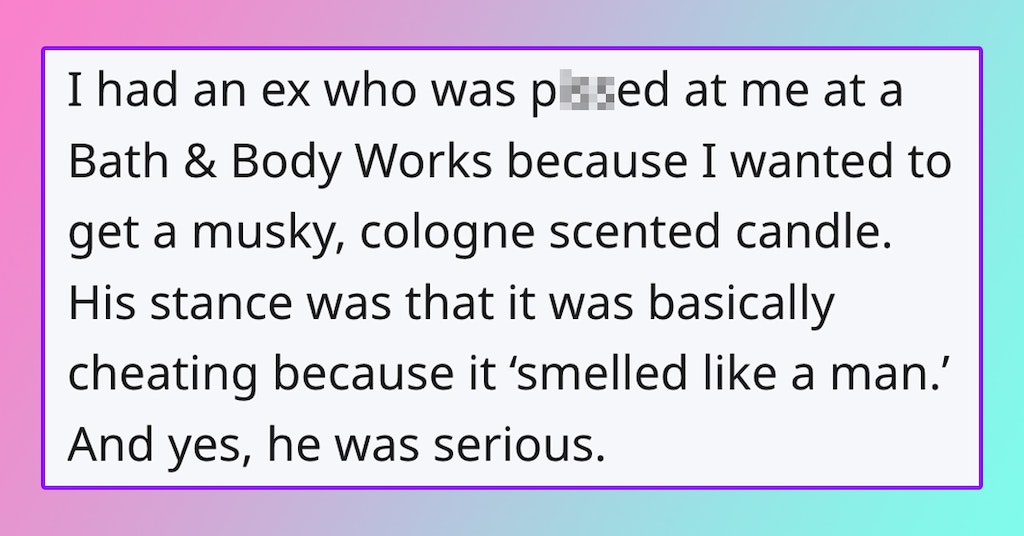 All of us can be a little insecure — but when insecurity turns toxic, you’ve got a problem. And unfortunately, insecure men can be both pathetic and frightening.

On Reddit, women are sharing their worst experiences with insecure men.

Dating them, knowing them, running into them randomly. The stories are all kind of awful, showing us how toxic men try to control and abuse women, sabotage relationships, and even find evidence of emasculation in a martini glass.

“He dumped me because he believed I had slept with 2 more people than him (I hadn’t told him my real number in the first place, it’s no one else’s business, but it was actually a lot higher than 2 more). He stewed on it for 3 years before dumping me because he felt like less of a man – he’s the man so his number should have been higher. He asked me back out six months later because he had slept with 3 people, making his number higher than mine and making me acceptable to date again. What he failed to realise is that I wasn’t celibate for that six months. His additional 3 didn’t even cover my original, true number, never mind cover the additional people I slept with in that six months. Idiot. A man asking me that question now is a huge red flag and I don’t entertain men like that. I back out immediately.” — SleepFlower80

“Today is my late mothers birthday so this question is very timely. I got married very young and my mother died of cancer shortly before our one year anniversary (I was 19 going on 20). My now ex husband stated that I chose my mother over him since I spent so much time with her while she was dying. He also would get upset with me for grieving and crying in the year after she died.” — hileo98

“I had an ex who was pissed at me at a Bath & Body Works because I wanted to get a musky, cologne scented candle. His stance was that it was basically cheating because it ‘smelled like a man.’ And yes, he was serious.” — natsuhime

4. Insecure About His Height

“When I was 20 I was dating a man for about 4 or 5 months. We were going out to a Halloween party with a bunch of his friends. He and I were roughly the same height. Not thinking about it I wore heels. I met him at the party and he told me I had to change my shoes. I didn’t have other shoes with me and I was an hour from home since this was on his college campus. He wouldn’t talk to me the entire night and when we got back to his place he screamed at me for an hour that I was an embarrassment. All because he was insecure about his height. I didn’t care about his height. I dated two other men who were my height. The one stood on tippy toes the one time i saw him while wearing heels. The other never gave a shit about height and was confident. Guess which one I stayed friends with.” — CinematicHeart

5. Sitting Outside The Apartment

“I think this counts as insecure…if not I apologize…I was dating a guy for about a month when this particular incident happened. We worked in similar-ish fields (paramedic and police officer) and that’s how we met. It’s also important to note that my paramedic partner was a man. We were set to go on a date one Friday but I cancelled due to a nasty migraine. My partner brought me medicine (being a long time paramedic he had a good idea of what would help) and shortly after he left I got a text from the guy asking why another man had come to my apartment. Apparently he had been sitting outside my apartment all day to make sure I didn’t go anywhere or see anyone else. He had met my partner before so he knew what he looked like. And my partner was only over long enough to drop off some medicine and feed my dog. We didn’t last long after that.” — Zoo_In_The_Bathtub

“I drew a picture of a flower on a bar napkin and gave it to my then-boyfriend, and he glared at me and said ‘when you do stuff like this it makes me feel so small.'” — badadvicefromaspider

“One of my fav stories that I bring up routinely is from when I was a bartender. Had a 40 something year old gentleman and a lady come in and sit at the bar. He ordered a gin martini, and ordered for his companion as well. I made it, and served it to him. His face instantly dropped and he looked absolutely INSULTED. I confirmed that I got his order correct, and he assured me he ordered a martini. But he was furious I put it in a martini glass. I explained how it was a martini and it was literally designed for the drink he ordered. He demanded to get a ‘manly’ glass. I made one in a rocks glass and he was fine…I understand some people like stemless glasses or have issues with certain glassware and I have no problem accommodating, but I’ll never forget this man having a full on fit because his glass was emasculating him.” — aimee-se

“Dated a guy who would make fun of me for having rolls on my stomach (thanks) and then maybe 1-2 years after we broke up, we had talked to each other as he still owed me like $2000 that he made excuses for why he couldn’t pay. He asked me what I do for a living and I proceed to tell him I got a job at a gaming company and he drops ‘you were just hired because you are a woman’ to which I kindly told him to f*ck off and that I was selected in the end out of like hundreds of people and it had nothing to do with my gender. Jealous and insecure men always find a way to invalidate your success.” — Empressoftheforsaken

“Dunno if it’s just insecurity or sexism, probably a mix of both. My ex claimed he was deeply traumatized when he learned that his previous partner had a couple of one night stands before dating him, said he could never trust her again after she ‘confessed’ to this.” — lucid-delight

“My first relationship was with a guy that felt the need to talk about the hot models and actresses he had had sex with before me. I literally never asked and it wasn’t relevant to anything but he still showed me these girls Instagrams as if he wanted a medal for how much of a stud he was. Anyway, the guy was terrible with money and always running to mommy and daddy for cash handouts, never gave me an orgasm, was a high school dropout, balding by 23 and already had a drinking problem. I saw why none of these hot women were still with him. Also upon further inspection half of the girls weren’t even following him back on social media. He just made himself look like an utter fool.” — thanarealnobody

“My first relationship was with a fairly verbally and physically abusive guy. When I finally left him and entered my last relationship, he would randomly show up outside of my apartment ‘just to check in on me.’ Once his random appearances started to go ignored, he would begin to show up more often and with groups of his guy friends in an attempt to intimidate me. One of my roommates at the time worked in the leasing office and was able to get the situation under control, but it was a scary couple of months.” — friendly_ficus

“My ex boyfriend! Refusing to take care of his own child when I was around because that’s women’s work. Specially if any of his buddies were around. Treating me like a maid when his friends were around.” — cleaning-meaning

“I got yelled at because me and my friends used ‘big words’ (not English) at a party. He was drunk and worked himself into a rage fit over weird shit and this was what surfaced. His lower level of education was never a problem for me, and I didn’t know it was for him until then. So bizarre.” — Allegutennamenweg

“I was dating a very nice boy who seemed not to have an opinion on anything. When I tried talking to him about it, and about how I didn’t even feel like I knew him even after a month of dates, he told me ‘tell me what you want and that’s what I’ll be.’ Yikes. I hope he’s gotten therapy since then, truly.” — chewedupshoes

“I dated a guy for 6 years who was insecure about his package. He constantly accused me of cheating, said I was too loose and that meant I was cheating. He would stop mid-sex and ask me if he was enough or tell me he didn’t feel like he was enough. He always accused me of not being honest about how many men I slept with before him. Asked me to compare his size with my ex. It was a toxic mess. I couldn’t even go the grocery store without being accused of cheating.” — Etherealmushroom11

“My ex broke up with me because my shoes were too bright a color (they were neon orange sneakers) and they would attract too much attention from other men.” — spellets