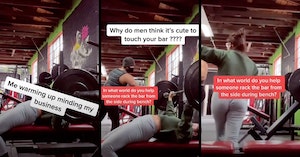 Gym Bro Tries To ‘Help’ Woman Lifting Weights Without Her Consent, Gets Called Out

There are times when it’s nice to help people without being asked — holding the door for someone, picking up something that they’ve dropped on the ground, stopping them from accidentally walking into the path of a speeding car. But in a number of situations, stepping in to “help” can actually be more of a hindrance than anything else.

TikToker @dezsquats gave the perfect example when she shared a video in which a man — who she says she did not know — offered up his “help” at the gym.

She was filming herself on the bench lifting some heavy weights when some dude just popped on over from the side and tried to help by grabbing onto one side of the weights. Unsurprisingly, this threw @dezsquats off balance, which she was fortunately able to correct before anything disastrous happened.

Although the video doesn’t have synced audio, after the TikToker gets the weights securely back in position, she takes a minute to yell at the unhelpful gym bro and send him off to mind his own business.

“This man had been following me around the gym trying to ‘help’ me my entire lift,” she wrote. “Why do men think it’s cute to touch your bar??”

Viewers weren’t any more amused about the intrusion than @dezsquats was.

“As a gym attendant, if you showed me this video he would have his membership revoked that day and you would be escorted out at the end of your sesh,” wrote @jonny_how, referencing the need to make sure someone being harassed was safe.

“That is so dangerous wtf esp when you clearly have headphones on,” @onethiirdcrochet added.

@danasiabray pointed out that the TikToker wasn’t even struggling, “AND he only lifted ONE SIDE OF THE BAR. What exactly was he tryna help with?”

And one astute viewer commented that the man would almost certainly “never do this to another guy.”

Despite the annoyance of this one dude, @dezsquats has continued posting other gym videos — including one showing how people should actually go about helping someone with lifting, starting with, you know, being asked for assistance.