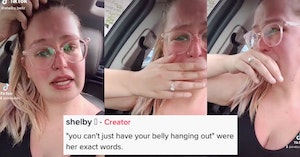 Going to the gym when you haven’t in a long time can be an incredibly intimidating experience. Chances are you aren’t feeling too hot about your body if you’re willing to jump on the elliptical.

A Canadian mom named Shelby Rodriguez was putting herself out there and getting back into shape when she had a very unpleasant experience with her gym’s staff that she posted about on TikTok. All too many people could relate to her pain and embarrassment.

In her video, Shelby is seated in her car in her gym outfit—black leggings and a black sports bra.

It should be noted that the two pieces of clothing almost meet in the middle, so not much of her body is actually exposed. But her gym has a policy that people must wear shirts. Shelby says that she was told that when she came in, but it would be okay for her to use the facilities that day as long as she abided by the dress code the next time.

But then when she was on the treadmill, another staff member kicked her out:

She also seems to be most upset about how she was spoken to by staff who told her that they couldn’t have patrons’ “bellies hanging out.” In a follow-up video, Shelby says she does not believe she would have been spoken to that way if she were skinny.

In an interview with Bored Panda, Shelby admits she wasn’t “completely in the right” she felt they handled the situation badly.

“I spoke to the manager of the gym on the phone after the incident, and he said that their policy IS actually to tell people to just wear something else the next time,” Shelby said. “When I was spoken to a second time by a second employee, I explained what had happened when I arrived and said, ‘The lady at the front desk said it was alright for this time’ and held up my wrist, showing my wrist band.”

She continued, “I don’t know why, but she just kept repeating herself, ‘Well you just can’t be here wearing that,’ no matter how many times I tried to explain and again show the wrist band. This went on until I was emotional and didn’t know what else to do but leave, it was clear that I wasn’t welcome…She could have easily spoken to the first lady herself but instead she berated me, the patron at the gym.”

In regards to her viral TikTok, she appreciated the support she received but was surprised by how many people told her to suck it up.

“I had a TikTok video with almost 2 million views, with hundreds of people telling me I’m just a crybaby (along with even more amazing and supportive comments), and I’m still going back to that same gym. I’m not giving up,” she said. Sometimes you just need a good cry in the car to keep going.