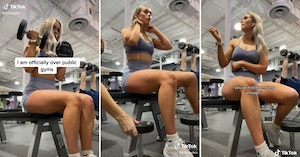 An impatient woman at gym may not have realized that the camera was rolling when she snatched a dumbbell literally out from under TikTok user and fitness influencer Kylen Suttner, declaring that she had been using the equipment for too long. Most gyms don’t have time limits on how long someone can use a basic thing like weights, and typically they have more than one or two dumbbells available, but for whatever reason, the woman who has been dubbed another “Karen” thought she was entitled to the ones Suttner was using.

“I am officially over public gyms,” the overlay text reads as the video begins.

Suttner often films herself working out at the local gym to demonstrate her technique to her followers, but public gyms carry the disadvantage of being open to other people, who can at times be rather rude and immature. For example, this woman, instead of simply asking Suttner how much longer she would be with the weights or if she could use them for a while, instead opts to grab one of them when the TikToker puts it down for a moment.

“Oh, sorry. I was using that,” says Suttner.

“I’ve been waiting for these for a really long time,” Karen replies. “You’ve had them forever.”

“I just have a couple more,” Suttner explains.

Suttner ultimately let this woman take the dumbbell, likely wanting to avoid making a big scene with someone who feels that entitled to the space around her regardless of anyone else’s needs. The act was so egregious that some TikTok commenters accused her of staging the whole thing for clout, but Suttner confirmed to the Daily Dot that it really happened and expressed her own bafflement over the woman’s behavior, pointing out the clear other options that were at her disposal.

“They could find another pair of dumbbells!” she said. Alternatively, they could “report me to the front desk if they think I had them for an excessive amount of time” rather than doing such “a Karen thing to do.”

If you still don’t believe her, you might have not spent much time at public gyms, particularly as a woman. You could also refer to the many other comments on Suttner’s video describing very similar incidents of other gym patrons just up and stealing the equipment they were using, sometimes right out of their hands.

“A guy literally tried taking it out of my hand mid set,” said one TikTok user. “Becuz he ‘couldn’t’ use the silver ones. My bf & his bro pressed him. Then he left scared.”

“No I literally had a guy do the same thing with my bench I was using,” said another.

Regardless of whether it’s real or not, many others expressed that they would have lost it if someone had pulled this on them.

“Omg girl. This is actually insane. I would’ve lost my MIND,” wrote another fitness TikToker. “BTW you were TOOO nice to her.”