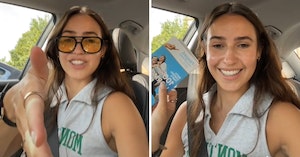 Gynecologist Refuses To Tie Woman’s Tubes Because She ‘Might Meet Mr. Right’

A viral TikTok video is helping to expose an extremely common problem in reproductive healthcare in which women are denied tubal ligation procedures because they might theoretically want to become pregnant later. Tubal ligation, more commonly referred to as having one’s “tubes tied,” is a technically permanent procedure in which the fallopian tubes are cut, tied, or blocked in order to prevent any chance of pregnancy.

Although there are surgeries that can attempt to reverse this, they have a low success rate. This fact, combined with pure misogyny, leads many doctors to refuse to perform this procedure on women because they don’t trust them to make the right decision about their own bodies and lives.

So when 22-year-old Olivia requested a tubal ligation from her gynecologist, she was flatly denied and told that she “might meet Mr. Right.”

Olivia expressed her outrage at being told she doesn’t know her own mind in a TikTok video that quickly went viral, gaining over two million views in the space of a week. In the video, she reenacts the conversation she had with her doctor.

“Hi, Mrs. Gynecologist!” she says. “My name is Olivia. I never want children. I’ve had this made up in my mind since I was old enough to think of the concept. Can I please have my tubes tied?”

“Yeah, I know!” Olivia responded. “That’s why I asked. I’d like that option.”

The doctor’s response was a very common one for women who seek voluntary sterilization, invoking both the sexist trope that women don’t know what’s best for themselves and the heteronormative assumption that Olivia even dates men.

“You might meet Mr. Right and change your mind.”

Olivia, however, asserted that she would not be changing her mind, having noted previously that she had felt the same way about having kids for many years and was confident in her future childless plans.

“Yeah, but you might change your mind, and it’s permanent, so here’s a brochure for an IUD,” replied the gynecologist.

An IUD is a device implanted into the uterus to prevent sperm from reaching the eggs produced by the ovaries, and though they are often very effective, they are not a replacement for tubal ligation. They can last up to five years but are in no way permanent, and many people who try them find that they experience unacceptable side effects from the device that are not produced by tubal ligation.

The procedure to insert an IUD can also be much more painful than a tubal ligation, which typical requires the patient to be fully sedated and unconscious, and can result in painful cramping and bleeding for around three months after insertion. There is also a small chance of improper insertion causing serious problems and failing to prevent pregnancy.

Regardless, this is not what Olivia wanted for herself. Unfortunately, especially in the case of young women, getting a tubal ligation can be extremely difficult simply due to the fact that doctors will refuse to perform them on the assumption that the patient might change their mind. This kind of potential for regret does not stop other surgical procedures, which have an overall regret rate of about 14 percent.

In the case of sterilization, there are other options for having kids such as adoption or surrogacy, but doctors remain reluctant to perform this otherwise save and minimally invasive procedure because they don’t trust women with their own lives and bodies.

Other women expressed similar outrage for Olivia and people like her who have tried to get a tubal ligation in the comments as well as irritation for anyone who refuses to accept that some people just do not want kids and never will.

“Mr. Right is someone who also doesn’t want kids how hard is that to understand,” said one commenter.

“It’s scary that as adults they can disregard our wishes for no reason and deny us care,” wrote another.

Some users directed Olivia and others to the “Childfree” forum on Reddit, where they keep extensive lists of doctors willing to perform sterilization procedures without questioning your personal decisions.