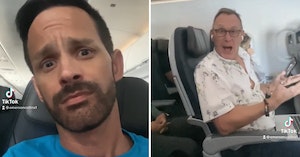 One plane full of people was recently subjected to what has been described as the “weirdest flight ever” after someone managed to hack into the intercom on the flight and commenced making weird noises over it until they landed.

Actor Emerson Collins captured some of this in a TikTok video, as well as the flight staff’s response, although they were apparently unable to figure out how to stop this mystery person from making sounds as though they were “having a puke-yank.”

“These sounds started over the intercom before takeoff and continued throughout the flight,” Collins wrote on Twitter. “They couldn’t stop it, and after landing still had no idea what it was.”

After sampling a couple of the noises, which sounded like a young man groaning and croaking into the mic, Collins explains what’s going on.

“Someone on this flight seems to have broken into the intercom system and continues to make a sound that is somewhere between an orgasm and vomiting,” he says.

Almost immediately after he finishes this statement, one of the flight staff comes over the intercom to state that they were aware of the situation and trying to rectify it.

“Ladies and gentlemen, we realize there is an extremely irritating sound coming over the public announcements,” the woman explains. “The flight deck is trying to troubleshoot, trying to turn it off, so please be patient with us. We know this is a very odd anomaly and none of us are enjoying it.”

It’s unclear whether this person was on the flight or were able to hack into the system remotely, though it does seem like someone would have noticed a guy making weird sounds into a microphone if he was on the plane at the time.

According to a later comment by Collins on Twitter, by the time he was exiting the plane, the flight staff still had no idea how the prankster was pulling it off, let alone how to stop it.

Collins seemed to be very amused by the situation throughout the flight, but not everyone appeared to feel the same way.

“I laughed soooooo much longer than anyone else!” he said to a commenter.

A flight attendant was convinced it was a prank, and that certainly seems likely, and even the captain came on the intercom to tell passengers that they were still trying to fix the problem. In the end, when there was only silence to greet them as the plane touched down, Collins said he felt “disappointed there wasn’t a landing… climax.”

In addition to Collins, those who didn’t have to endure this flight widely found the video to be deeply hilarious. One commenter even came forward to say he had experienced something similar on a flight the previous week.

“This happened to me last week,” he wrote. “It wasn’t the whole flight, but periodically weird phrases and sounds. Then a huge ‘oh yeah’ when we landed. We thought the pilot left his mic open.”

Nobody seems to be able to explain how someone could hack into a flight intercom like this, with some expressing concern that the power could be used for evil. But mostly, people are shedding tears of amusement rather than fear.