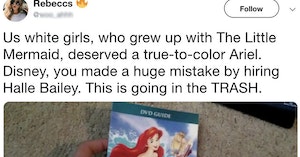 Disney announced on Wednesday that Black actress and singer Halle Bailey of A Wrinkle in Time and Grown-ish has been cast to play Ariel in the live action version of the classic film The Little Mermaid. Naturally, racists everywhere are pooping their Pampers.

This viral tweet complaining about the Little Mermaid casting being racist has a profile pic stolen from an Instagram model. The “half black best friend” pic is taken from god knows where, but shows up in a bunch of Pinterest BFF roundups pic.twitter.com/aYMwKf1XNl

As usual, racists are responding to this new bit of Black representation by throwing away perfectly good DVDs and blu-rays. Meanwhile, Black individuals are left to point out that Disney has largely left them out of their movies for the past 81 years, with Tiana being their only Disney princess.

We white girls actually have seven “official” Disney princesses who look like us and several more lead female characters who aren’t on the official princess list right now, while every other race gets one.

So who actually cares if they cast a Black woman to play a mermaid? If you’re not completely racist, you probably won’t understand if even you try, and we don’t recommend trying.

Instead, enjoy Black Twitter’s celebrations and perfect burns on racist white people who are more offended by a fictional mythical creature’s race than concentration camps.

will smith was the genie, beyoncé is nala, halle as ariel. the blacks are taking over baby girl!!! i know y’all hate to see it. snow black is next. pic.twitter.com/U5cZT7faXd

We live in a world where people freak out when POC plays a live-action remake of a cartoon character. pic.twitter.com/VyeG3iUOcM

To everyone whinging about Disney’s decision on the new Ariel ???????? #TheLittleMermaidLiveAction https://t.co/XxSscRhG9R

Black Twitter to everyone complaining about not having a white Ariel https://t.co/RIlP410ieA

Listening to all the racists complain about Ariel being black, I honestly can’t ???????? pic.twitter.com/eA1x4rj6L0

Ariel is bringing out a lot of economic anxiety.

white people tripping off black Ariel but they did this pic.twitter.com/EGxxPJppUK

Locals: “bUt AriEL wAs wHiTe iN thE AniMaTe-

Many have pointed out that not only is it absurd to complain about this casting choice, it actually makes a lot more sense than white Ariel.

Fact box: the Little Mermaid lives on a TROPICAL CORAL REEF with a calypso-singing lobster with a strong Jamaican accent. When you think about it, it's bizarre she was white the first time around.

Here for it! Also – before you @ me – it's a mermaid (fictional creature) who lives in the Carribean, so if you're outraged… Pause. https://t.co/PUPtUPPZu4

I dont care who is playing Ariel as long as she has EXACTLY 20 thingamabobs. No more. NO LESS!

These people complaining about the casting of a black woman for Ariel. ????????‍♀️Ariel is half fish, breathes underwater, is best friends with a seagull and has her voice stolen by a woman with tentacles…But dark skin?! Now that’s just far fetched…????

Y’all mad Ariel is of color but there are kids being separated from their families, dying in cages at the boarder… but that’s none of my business.

– People who believe Jesus was white.

Go back to posting about essential oils on Facebook, Karen.