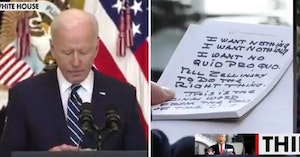 Sean Hannity of the Fox News outrage machine was shocked, shocked I tell you, to see President Joe Biden reading from some notecards during his recent press conference.

“Never in my lifetime have I ever seen anything like this before,” the FOX News personality said yesterday.

He must not have been paying very close attention to Donald Trump over the four years of his presidency, then, because it didn’t take long for people to find a video of the ex-president doing exactly that, only worse.

Remember that time Trump brought out his notes for a press conference on the thing he would ultimately be impeached for the first time and the press got a shot of “I WANT NOTHING” written twice in black Sharpie? And then he read directly from that pad of paper, staring right at it like he was giving a fifth grade book report?

Twitter user @Acyn remembers and posted a video that plays this loud scene that the internet spent days mocking right after Hannity tries to claim no president has ever read off notecards during a speech.

In fact, presidents have long used aids to help them remember the exact wording of their speeches, because presidents generally have more important work to do than rote memorization. It’s only Republicans who ever seem to care about this, as they pretended to when they freaked out about President Barack Obama using a teleprompter, just as George W. Bush did before him.

Even Trump’s display wouldn’t have gotten any attention from the media if it weren’t for the fact that he seemed to need a reminder to say the same simple sentence twice in a row. Biden’s use of notecards during a press conference in which he was presented with questions he didn’t know about beforehand was, in fact, very typical.

Hannity seemed to be parroting Donald Trump in his response to this press conference, as the current Florida man made a similar claim about it in an interview on The Ingraham Angle while accusing the media of feeding Biden “softballs.”

“Well, they were strange questions and they were asked in an interesting way. It was like softballs, like you’re throwing softballs up, and it’s just a different world,” said Trump. “No one has seen anything like it.”