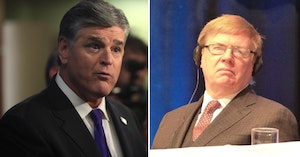 The U.S. Department of Justice revealed today that they arrested former Fox News producer Jack Hanick on charges of helping a Russian oligarch, who had been previously sanctioned by the U.S. even before the unprovoked invasion of Ukraine, by assisting him with launching Tsargrad TV — a right-wing, pro-Putin TV channel. The channel, owned by said oligarch and pro-monarchist Konstantin Malofeev, has already been blocked on YouTube in response to the invasion.

Hanick was reportedly arrested on February 3rd in London on charges that his assistance allowed Malofeev to subvert those sanctions, which were put in place in late 2014 due to his financing of Russia-backed separatists who rose in power during the Revolution of Dignity. The unsealed grand jury indictment accuses him of various business dealings with the Russian billionaire over the years as well as lying to FBI agents about his travels related to launching the Russian TV network.

Hanick has been credited as being one of Fox News’ founding producers, starting there in 1996 when it first launched, and spent his early years at the network as a director for Sean Hannity, one of their most notorious political commentators. He left Fox News in 2011 and was spotted making deals with Malofeyev three years later.

Federal prosecutor Malofeyev said in a statement that in spite of the fact that the 2014 sanctions “prohibit United States citizens from working for or doing business with Malofeyev but as alleged, Hanick violated those sanctions by working directly for Malofeyev on multiple television projects over the course of several years.”

After Tsargrad TV started broadcasting in 2015, it wasn’t long before it was being compared directly to how Fox News operates in the U.S.

In an embarrassing turn of events for Hanick, federal agents said that they were able to indict him based on an unpublished memoir that he had kept in his email account, which was accessed by agents after they obtained a search warrant that allowed them access to the account.

It would seem that Fox News’ ties to Russia and their general pro-Russia, pro-Putin sentiment may predate even the presidential campaign of their hero, Donald Trump, who had nothing but praise for the dictator and his oligarch buddies during that whole unfortunate period in U.S. history. Even as the world has turned against both Russia and Putin due to the highly unpopular and seemingly bungled attack on Ukraine, the network has continued to praise both and suggest that the U.S. should be on their side.

Trump, of course, praised Putin’s assault, which has killed hundreds of civilians as the Russian military targets residential areas, as “genius.”

The Justice Department is now seeking to extradite Hanick from the U.K., where he currently resides. People not on the side of Russian oligarchs are enjoying finally seeing some consequences coming the way of Fox News executives, even former ones, after years of evidence of this kind of collaboration.