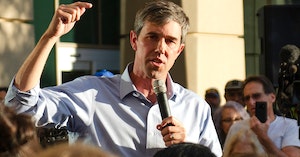 Harry Styles spoke out in support of Beto O’Rourke’s campaign to become governor of Texas at a recent concert — and it turns out his opponent’s daughter was allegedly in the crowd.

The “As It Was” singer made the shout out during a stop in Austin, Texas, first very pointedly showing the screaming crowd a giant sticker on his guitar reading “Beto For Texas.” Styles tapped and circled his hand around the sticker as the camera giving audiences a better view zoomed in, before cutting to none other than O’Rourke himself sitting in the audience.

If anything, the cheers got even louder upon the crowd realizing O’Rourke was present.

Styles indicating to a crowd full of fans that he supports O’Rourke’s candidacy was enough to make waves on its own.

Conservatives complained that Styles has no right to be commenting on American politics as a celebrity who isn’t a citizen of the United States, but ultimately, that opinion doesn’t mean anything as Styles clearly has no qualms with speaking up.

But then word broke that current governor Greg Abbott’s daughter was at the concert.

Abbott, a Republican, has been governor of Texas since 2015, and is O’Rourke’s opponent in the upcoming election.

His 25-year-old daughter reportedly posted video from the concert to her Instagram stories, prompting people to wonder what she made of the whole situation.

It isn’t clear where Abbott’s daughter lands politically, but children of conservative politicians opting to go a different direction than their parents certainly isn’t anything new, especially in the era of MAGA.

And while boomer conservatives historically have some problems identifying the bands they love as boldly dismissive of their beliefs, it’s hard to imagine staunch conservatives throwing their support behind a singer that’s all about freedom of gender expression and positivity.