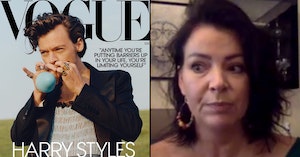 If you’re wondering what the big deal is over Harry Styles wearing dresses and skirts in a new Vogue cover shoot, know that Harry Styles’ mom agrees with you.

Some prominent conservatives, including Candace Owens, took to Twitter to criticize Styles for contributing to what she called the “steady feminization of our men” by posing for photos in the magazine’s December issue.

But Styles’ mother, Anne Twist, feels differently. In an interview with British television personality Lorraine Kelly on Tuesday, Twist asserted that her famous son was simply having fun playing dress-up.

“Do you know what I love about him?” Kelly observed. “Why should you think clothes are for girls or clothes are for boys? Wear whatever you like.” Kelly also noted that Styles was “breaking barriers” and “looking rather gorgeous.”

“I think maybe I had something to do with it because I was always a big fan of doing fancy dress with them when they were smaller,” Twist said of both Harry and his famous sister Gemma Styles. She admitted Harry was more into it than Gemma before asking rhetorically, “Who doesn’t love playing dress-up?”

If Twist is responsible, there are quite a few people thankful for her contributions.

And, as one observer noted, Candace Owens seems to enjoy a bit of “dress up” herself.

And the Harry Styles edition of Vogue might be bringing another type of “crisis” entirely: