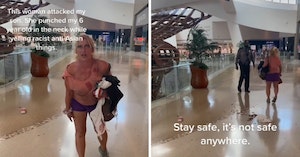 A TikTok video posted last week appears to catch the end of what is being investigated as a hate crime just outside The Shops at Crystals mall in Las Vegas after a white woman allegedly punched a South Korean woman’s six-year-old child in the neck before spewing anti-Asian hate. The attacker has been identified as Shelly Hill and was arrested after mall security let her go, with the mother of the victim promising to pursue charges.

“This woman attacked my son,” wrote TikTok user uhmmajo in the overlay text. “She punched my 6 year old in the neck while yelling racist anti-Asian things.”

“This happened at a luxury mall,” she added. “Stay safe, it’s not safe anywhere.”

This is unfortunately how many Asian individuals and families in the U.S. have felt after over a year of increased hostility toward people who look like them, with assaults and other hate crimes popping up everywhere across the nation. Many of the victims have been elderly, but sneaking up behind a mother and child to punch a six-year-old in the back of the neck might be a new low.

“I hope the cops picked her up,” said uhmmajo in the video description. “Mall security just let her go. Yes, we are pressing charges.”

According to Yahoo News, Hill attempted to flee while still yelling racist garbage at the family, but the mother pursued, enraged that her young son had just been attacked for no reason.

The video catches the white lady screaming mostly incomprehensible things, including profanity and something about China. Hill looks to have spilled half her things over the floor and spilled something on her shirt, not exactly giving her the appearance of a stable person, and is stopped by mall security as she once again tries to walk away.

“By the time I caught up to her, I could see security approaching because I made quite the commotion,” said uhmmajo. “All that trash littered on the ground happened when I confronted her and she dropped her things.”

The mother told NextShark that her son is “shaken up but is doing okay” and was glad she didn’t hit his two-year-old sister, who was in her mother’s arms at the moment of the attack.

Local police were able to identify and local Hill thanks to the video footage, which has been viewed over 1.1 million times on TikTok. She is being held on a $3,000 bail and will face a judge this Sunday, charged with both battery and a hate crime.

The video soon spread to Twitter, where people expressed their shock at Hill’s actions and many speculated that she may have been intoxicated or mentally ill as others remind them that drugs and mental illness don’t create racism.