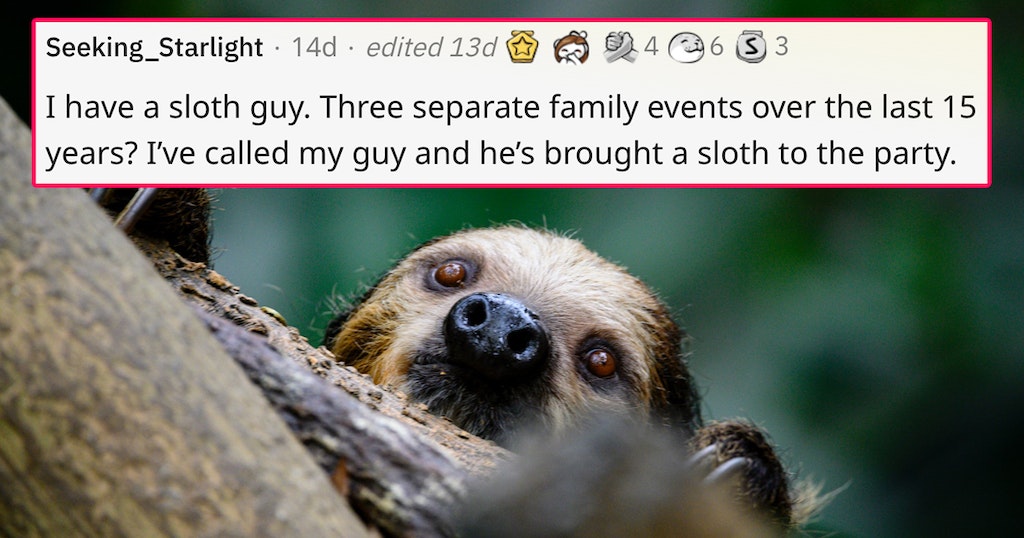 “What’s The Strangest Thing You ‘Have A Guy’ For?”—15 Replies

We’ve all got jobs in life that we’d rather not do. Some folx have a yard guy, a guy who drives them places, who does their laundry or manages their money. But some folx have taken this whole “I have a guy for that” thing to a bit of the extreme. Recently, Redditor u/Roentgenographer posed the question:

“What is the strangest thing you ‘have a guy’ for?”

And some of the responses were pretty funny. Read on for the 15 weirdest, funniest, and most random.

1. To provide physical intimidation and persuasion to your adversaries

“In high school I had a guy who would beat up my bullies for me.”

Thus, making me the ‘computer monitor guy’ for several other people.”

“I have a salsa lady, she’s been winning awards for it since before I was born.

Eta: Wow, I wasn’t expecting this to get so much attention. I’ll call her later today and ask if she’s open to shipping orders out for y’all.

Second edit: Sorry y’all, she says she sells out locally and doesn’t see the need to ship.”

4. A very specific category of produce

“I have a mushroom guy, not like psychedelic mushrooms but some rare high quality food grade mushrooms.”

5. Sloths (legally, and without animal cruelty)

“I have a sloth guy. Three separate family events over the last 15 years? I’ve called my guy and he’s brought a sloth to the party.

He runs a USDA-certified wild animal rescue and has has his sloth for close to 20 years. He takes extraordinary care of all of his animals. The sloth is not a performing animal- no one gets to approach, handle, or pet it. He simply brings it for a short period of time so that people can see it, and he discusses its life, behavior, and care. He does phenomenal work to protect and preserve wildlife- many of his animals came to him after being purchased by people who wanted an “exotic” pet they quickly realized they could not care for.”

“I have a mattress gal. She runs a high end mattress shop and is supposed to “dispose” of any returned mattresses. I take care of “disposal” by showing up at the customers place bringing the “disposal” mattresses around to any friends or family in need of a mattress upgrade. I got a sweet $4000 king bed for free and hauling it because it was a return.”

“I am the birdfeeder “guy” for a very wealthy man. When hes on vacation, I will go in the morning to fill up the feeders and at night take them down.

Edit: since a lot of people are asking, we take them down at night because of the raccoons and skunks.”

“I was the tissue guy for a while!

We had a list of ‘wants’ from different labs on campus. Anytime we did a necropsy on a lab animal, after the lab had collected the tissues they needed for their research, I would go in and grab tissues for other labs. I had one lab that was doing tissue scaffolding that needed 1 inch by 1 inch squares of proximal gracilis, another lab needed whole eyeballs, one wanted intact bladders.. but on the upside, nothing went to waste from a necropsy and labs that just needed control tissue or a source of healthy tissue didn’t need to euthanize a whole animal just for a bladder.”

“I got a guy who will mold your genitals and cast it in the metal of your choosing. That’s his specialty, he does other stuff like jewelry and general handicrafts but he’s happy to be known as the metal genital guy. Dude’s a character

“I used to have a pie guy. He would come around to my shop and all the shops and businesses in the area. Had savory Cajun pies and sweet pies. He had a few regular choices on hand all times and also took custom orders. The étouffée pies where incredible.”

“I grew up in Central California (Modesto) and my mom taught high school on the west side of town and there was a tamale lady that would come to the high school and all the teachers would get so happy and throw money at her for them.”

“Bee guy. If you need a hive removed he is the guy to call to safely and humanely remove the bees without killing them.”

“A chicken guy. His business cards say ‘Chicken Rescue’ on them. Pretty sure he’s also some type of mobster.”

“A friend who was a bit of good girl was doing a sociology project and hung out with a local drug lord for a bit as part of it. When illegal things were happening, he would tell her to leave for a while.

He ended up really taking a shine to her and at the end of the project he gave her his number and said if she ever needed anything to call him. A few months later she called him to just say hi, and he yelled at her not to call unless she needed something done to someone.

Being a good person with a connection to organized bad people just blows my mind.”

“I have an illegal cheese and jerky lady.

She owns a farm that sells legitimate animal products farm-to-table but she also makes cheese and jerky on the side and sells it only to people she trusts.

In Canada we have incredibly strict laws around dairy and jerky products.”