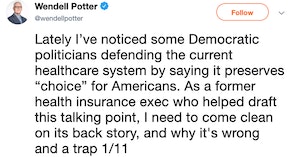 Tomorrow is the last day to sign up for a health insurance plan during the open enrollment period (after it was extended due to technical difficulties).In the U.S., not having health insurance is a huge risk due to the astronomical costs of even basic healthcare services in the country. Unfortunately, health insurance premiums are not easy to afford either, and have been increasing every year as Republicans have done everything in their power to sabotage the Affordable Care Act.

Medicare for All means that if you or your loved ones are in the hospital, you will not be on the phone arguing with insurance companies who are trying to deny you coverage. It means focusing on getting healthy.

The problem is so out of control that multiple Democratic presidential candidates are calling for Medicare for All—a universal healthcare program that would use tax dollars to make every visit to the hospital free for everyone. Other, more centrist Democrats have criticized this idea, in part by claiming that it will take away their healthcare choices, such as which doctor they’re allowed to see.

The former vice president of health insurance company Cigna, Wendell Potter, took to Twitter Monday to explain how the idea that the current system gives people any “choice” in their healthcare was pushed by these companies and why it’s a lie.

When I worked in the insurance industry, we were instructed to talk about “choice,” based on focus groups and people like Frank Luntz (who wrote the book on how the GOP should communicate with Americans). I used it all the time as an industry flack. But there was a problem. 2/11

“As a health insurance PR guy, we knew one of the huge ‘vulnerabilities’ of the current system was LACK of choice,” Potter wrote. “In the current system, you can’t pick your own doc, specialist, or hospital without huge ‘out of network’ bills. So we set out to muddy the issue of ‘choice.'”

Currently, health insurance companies will only cover what they call “in-network” doctors. If you see anybody outside of this list, your visit and any services that doctor performs will not be covered and you’ll be stuck with the full bill. For low-income individuals, even the “choice” offered in the list of in-network doctors can be restricted by the distance to their office and their office hours.

If you get your health insurance through your employer, you have even less choice.

Another problem insurers like mine had on the “choice” issue: people with employer-based plans have very little choice to keep it. You can lose it if your company changes it, or you change jobs, or turn 26 or many other ways. This is a problem for defenders of the status quo 5/11

So how did health insurance companies, which will, of course, become obsolete if Medicare for All is put into place, convince us that the current system offers us so much choice? According to Potter, mostly advertising.

An industry front group launched a campaign to achieve this very purpose. Its name: “My Care, My Choice.” Its job: Trick Americans into thinking they currently can choose any plan they want, and that their plan allows them to see any doctor. They've spent big in Iowa 7/11 pic.twitter.com/E45OwBuYzS

The health insurance industry even fought to ensure people have less choice within the current system, creating a so-called “Choice and Competition Coalition” to “scare states away from creating exchanges with better plans.”

Formerly a tactic used solely by health insurance companies, Potter was shocked to hear Democratic presidential candidates repeating these same lines to attack their opponents and Medicare for All.

The truth, of course, is you have little "choice" in healthcare now. Most can’t keep their plan as long as they want, or visit any doctor or hospital. Some reforms, like Medicare For All, *would* let you. In other words, M4A actually offers more choice than the status quo. 10/11

Potter’s thread has spread quickly, generating tens of thousands of interactions in one day. Many Twitter users have come out to support his message and offer up their own examples of the “choices” that the current system offers them.

Yep, I have the “choice” of any plan sold on the market right now for my little family of 4. My “choices” all cost well over $1900 a month for minimal coverage. My husband is self-employed. We are by no means rich yet this is the monthly price of insurance for us. That’s insane.

“So if a politician tells you they oppose reforming the current healthcare system because they want to preserve ‘choice,’ either they don’t know what they’re talking about—or they’re willfully ignoring the truth,” Potter concludes. “I assure you, the insurance industry is delighted either way.”