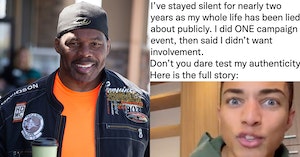 Senate hopeful Herschel Walker is under fire after claims he paid for a girlfriend’s abortion were published online, followed by a scathing rebuke from his own son.

Walker has held a staunchly anti-choice viewpoint in the public eye since beginning his campaign for senator in Georgia, running as a candidate for the supposed party of family values. He’s so against abortion, in fact, that he doesn’t think rape, incest, or the pregnancy threatening the life of the pregnant person are valid reasons to abort.

But according to an article published by The Daily Beast, the former football player is among the long line of Republicans who have no hangups regarding abortion when it impacts their own life.

The bombshell report claims a woman came forward with accusations that Walker got her pregnant back in 2009 and told her to get an abortion. Although she chose to stay anonymous, the publication says they reviewed a receipt from the abortion clinic, a personal check from Walker, and a get well card with his signature. They also say they corroborated the story with a friend who was with her at the time.

“I just can’t with the hypocrisy anymore,” she said. “We all deserve better.”

Walker has denied the claims, which prompted a series of harsh condemnations from his son, Christian Walker.

The MAGA influencer, best known for recording himself screaming at Kehlani in a Starbucks drive-thru line, implored his father to stop “lying and making a mockery of” him and his mother,” before accusing him of threatening to kill them in the past.

Christian followed up his Twitter statements with a video reiterating his insistence that his father has been telling lie after lie on the campaign trail.

“I was silent lie, after lie, after lie,” he said. “The abortion card drops yesterday. It’s literally his handwriting on the card. They say they have receipts, whatever, he gets on Twitter — he lies about it. Okay, I’m done. Done. Everything has been a lie.”

Christian then blasted conservatives for continuing to prop his father up, and liberals for allegedly blaming him for his father’s misdeeds.

Conversations about whether Christian should take responsibility for previous tweets he made supporting his father in order to further his own role as a MAGA influencer or if he is a victim (or whether both of these things can be true at once) are already under way, but most of the focus is on calling Herschel Walker and those who continue to support him out for hypocrisy.

But conservatives are already calling both Walker’s ex-girlfriend and Christian a liar, or straight up saying they don’t care if the accusations are true, so it’s unclear if this will have any impact on the upcoming election.

Meanwhile, Walker has referred to the abortion story as a “Democrat attack,” saying “they will do anything to hold onto power.” He has also claimed he is filing a lawsuit against The Daily Beast for the article.