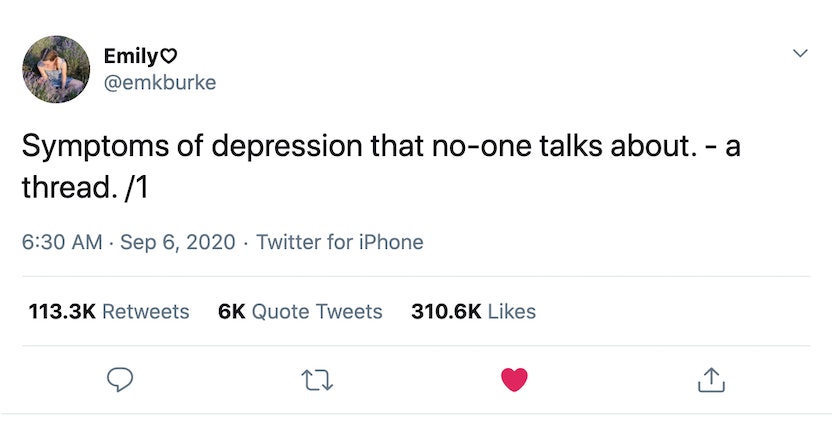 Even though the discussions surrounding mental health have definitely amped up over the past few years, there’s still a fair amount of confusion and misinformation that leads to people going undiagnosed for decades.

Depression is certainly one of the more difficult mental health disorders to pin down. People often assume it’s simply interchangeable with just being sad a lot, but the truth is a lot more complicated — and a lot more insidious — than that.

Emily Burke, a self-described mental health activist, took to Twitter earlier this week to try to help people gain a better understanding of what some of the symptoms of depression can be.

Mental exhaustion is one of the more common symptoms, as is dissociation.

It probably won’t surprise anyone to hear that just getting through the day is also tough for people dealing with depression.

Impulsivity, on the other hand, is one of the symptoms that many people may not realize can be a sign.

Burke goes on to describe physical effects, a sense of shame, inability to concentrate, and guilt as further symptoms of depression that people don’t always recognize for what they are.

And other signs of depression can lead to the person getting trapped in a cycle that’s harder and harder to break out of.

The feedback she received from her thread both validated the symptoms and helped people put into words some of the things they’ve struggled with.

Burke ended with a list of places in the UK that you can contact if you or someone you love may be struggling with depression, and it’s a list that’s always worth keeping at hand.