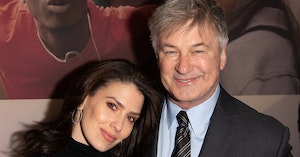 The announcement that Alec Baldwin would be charged with involuntary manslaughter in connection to the 2021 death of cinematographer Halyna Hutchins on a film set has brought renewed attention to his wife’s adopted Spanish accent.

Baldwin, along with armorer Hannah Gutierrez Reed, is set to be charged after accidentally shooting and killing Hutchins with a prop gun while they were shooting a movie in New Mexico nearly a year and a half ago. It’s a surprising and deeply controversial decision, and one that immediately had reporters seeking out comments from the actor’s family and associates.

Hilaria Baldwin was approached in a video that has since gone viral, less for her impassioned defense of the privacy of her children in the face of these charges and more for the Spanish accent she frequently deploys when speaking in public.

In 2020, Hilaria’s questionable accent drew enough scrutiny for people to start digging into her background, discovering that though she had publicly claimed to have been a native Spanish speaker who was born in Spain and who moved to the United States at 19, she actually grew up Hillary Hayward-Thomas of Weston, Massachusetts, although she did spend some time in Spain.

She later admitted that she is, in fact, “a white girl” and claimed other people made incorrect assumptions about her — a half-hearted statement that explained very little of the overall picture she had painted of herself and allowed to paint of her over her years in the public eye.

Hilaria’s response to the press brought renewed attention to her dedication to presenting as someone with a cultural background that isn’t authentically her own.

The Baldwin family admittedly has bigger concerns right now than people ragging on Hilaria’s choices on social media, but as many pointed out in response to the video, it is truly wild that she’s still continuing with this even after getting so publicly called out.