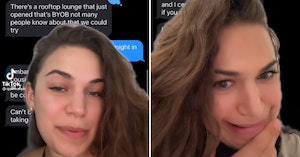 A woman on TikTok shared her conversation with someone she matched with on the dating app Hinge after “Jake” attempted to trick her into coming to a BYOB “rooftop lounge” that was really just the roof of his apartment building.

Many women will already be able to hear the alarm bells blaring in their heads, because there’s a very good reason why there’s an unwritten rule that we do not go to men’s homes on the first date.

Jake tried to play it off like it was going to be a romantic surprise when she figured out his game and called him out, but she was not impressed and told him off, then posted the conversation including his address on her account to warn others.

“Quite literally escaped my own episode of SVU,” the video description reads.

In their initial conversation, Jake claimed that the location of the date would be a rooftop lounge that had “just opened.” However, Quinn Martin, being a wise woman, asked for the address well before the date was to begin to check it out.

“A couple of hours before the date, I asked him for the address. I wanted to see what the place was all about,” she said. “He sent me the address of an apartment complex.”

When she asked him whether the place they were meeting was a restaurant because she couldn’t find any other information on the place, his response was not encouraging.

Martin was in disbelief at first, assuming that no man living in the year 2022 would attempt to trick a date into coming to his home without telling them.

“So I’m thinking, no way is this man trying to trick me into coming to his apartment building,” she laughs. “Yeah, no, that’s exactly what he was doing.”

She goes on to mock Jake’s response after she pointed out that he was being a creep, showing his messages claiming that it wasn’t his “intention” to trick her (it was) and that bringing her to his apartment complex would be a “nice change of pace.” What it could have been, however, was the setup to a true crime story.

However, Jake was not nearly as contrite after he found the TikTok video she made about him. In a follow-up video, she displayed his messages expressing distaste at the fact that she exposed him, claiming to have a “friend” at TikTok who would delete her account and suggesting he had called the police on her.

“Uh oh, looks like I’m going to jail,” Martin jokes before whispering: “I think I hurt his feelings.”

That was two weeks ago and the videos and her account are still up, so we can safely assume this was another empty threat by a man who nobody should date.

Unlike Jake, commenters are grateful that Martin posted the warning and that Jake has made this whole thing ten times funnier by pulling the “I know a guy.”

“It’s giving do you know who my dad is,” wrote one commenter.

“I have been so traumatized that I could tell where he was going with that the second I read it,” said another on the original video. “[W]hy do men have the audacity, I’m so sorry.”