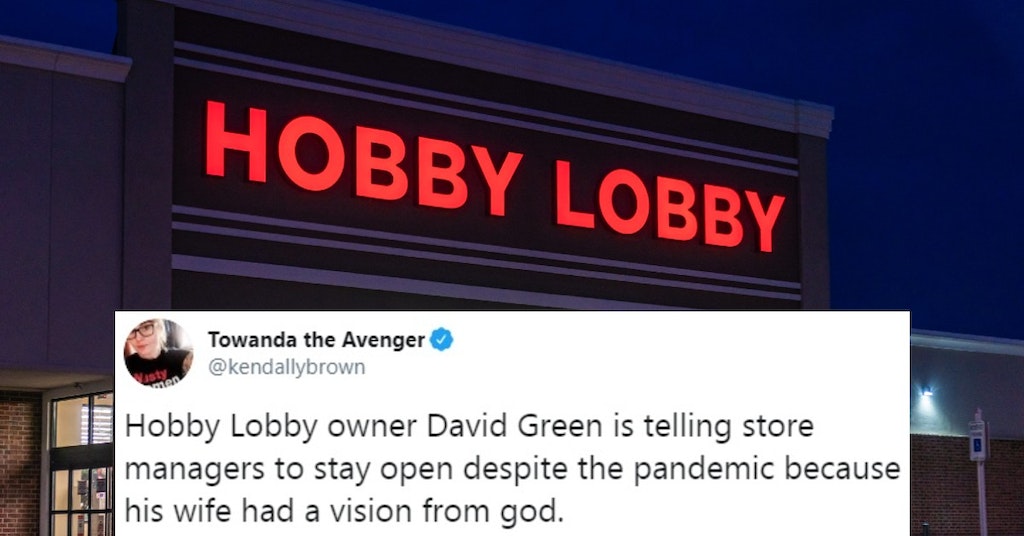 Photo via Tony Webster/Flickr (CC BY 2.0)

A letter circulating on social media allegedly sent to Hobby Lobby store managers by owner and CEO David Green tells employees that stores will remain open largely due to a prayer made my his wife Barbara. According to the letter, which has not been confirmed or denied by the company, God placed “three profound words” in “Barbara’s heart” that have convinced the couple to defy the current trend toward closing down non-essential retail stores.

Hobby Lobby refuses to close during this pandemic. There are over 40 cases in my area. Store manager refuses to close. I want to share this letter that was sent to managers pleading them to stay open and to have “faith” that everything will be okay in the end because his wife had a vision from god. from atheism

“In her quiet prayer time this past week, the Lord put on Barbara’s heart three profound words to remind us that He’s in control. Guide, Guard, and Groom,” Green allegedly wrote. “We serve a God who will Guide us through this storm, who will Guard us as we travel to places never seen before, and who, as a result of this experience, will Groom us to be better than we could have ever thought possible before now.” 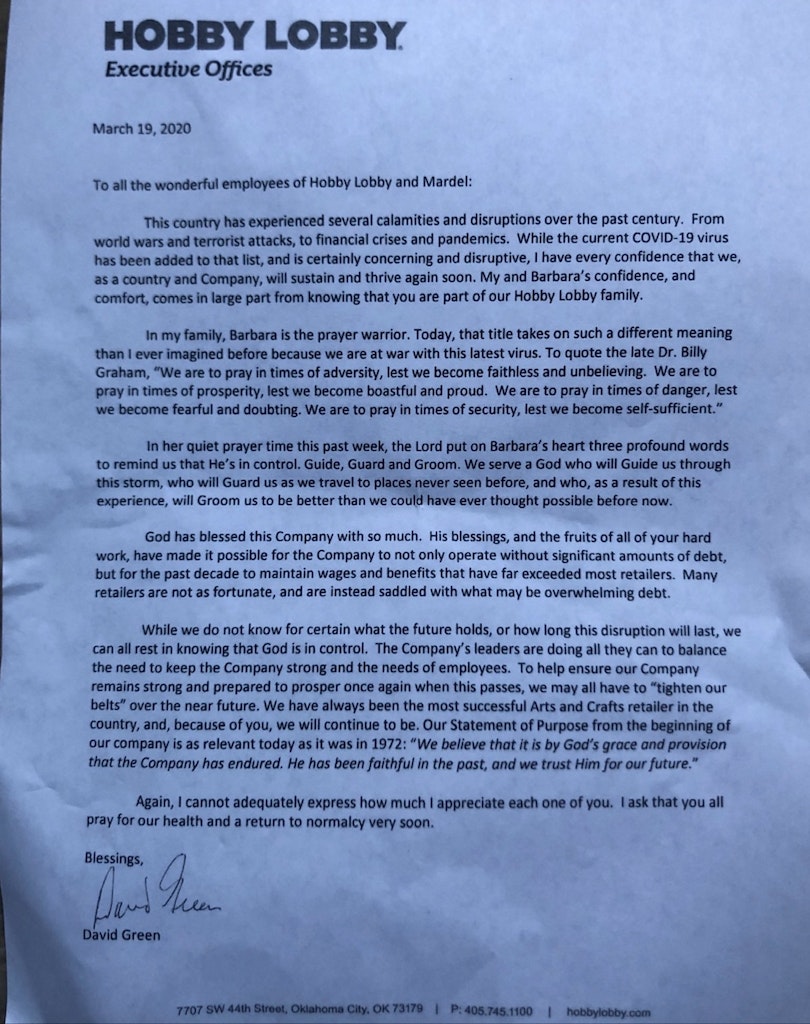 The alleged letter further warns that everybody (especially low-level employees, presumably) will have to “tighten our belts” in order to “keep the Company strong.”

Hobby Lobby’s website currently contains a notice on the coronavirus pandemic saying that they will continue to “closely monitor” the situation and promising enhanced store cleaning, employee travel restrictions, and that anybody showing COVID-19 symptoms will be sent home to self-isolate. It does not say anything about whether store closures are possible at any point in the future.

This company has come under fire in the past for using the CEO’s religion as an excuse for questionable actions, including fighting against the Affordable Care Act’s free birth control mandate in 2014. Also, for some reason, smuggling ancient artifacts from Iran.

This latest move, whether motivated by visions or words from God or not, is making Hobby Lobby even less popular than usual.

Hobby Lobby owner David Green is telling store managers to stay open despite the pandemic because his wife had a vision from god.

He also warns they'll all have to "tighten their belts" soon. His net worth is $6.4 billion—hourly employees don't get paid sick leave. #COVIDIOT pic.twitter.com/4pEhivDbNy

I’m sure Hobby Lobby employees will feel better about dying knowing the billionaire owner’s wife imagined that an invisible sky wizard told her it would be ok.

In today's "It's all about me" #COVIDー19 thread we feature @HobbyLobby owner David Green who says God told his wife to keep stores open.

Interestingly I spoke to God & he said Mr Green is a dangerous & greedy bastard.

I guess we have different gods. https://t.co/BsZKBHM1VL

Hobby Lobby CEO David Green is worth $6.4B

Instead—he pays his cashiers $10/hr, denies them paid sick leave, is warning they’ll have to ‘tighten their belts,’ & is making them work during #Covid_19????

Hobby Lobby has not returned a request to comment on or verify the letter’s authenticity.