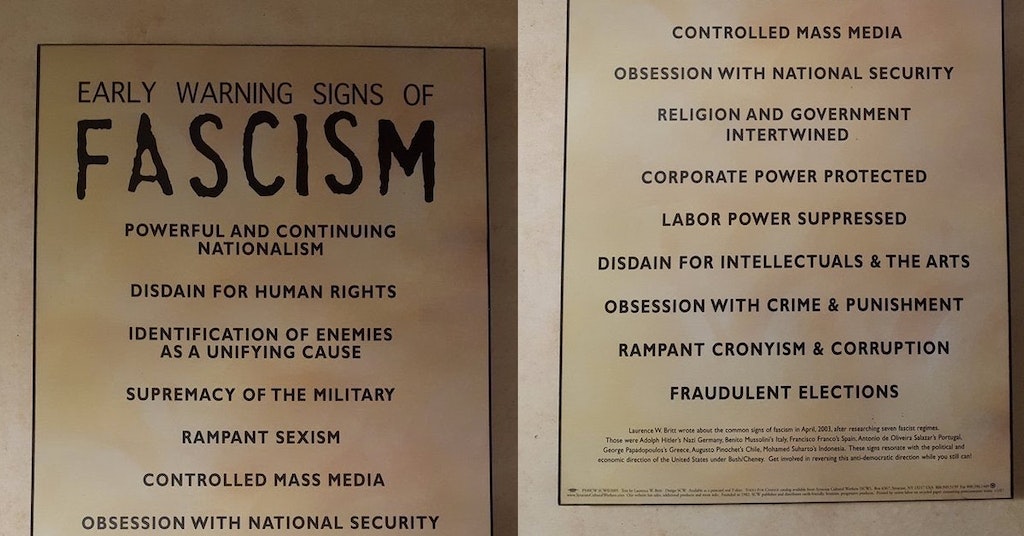 
Fascism has slowly become a topic of conversation in the United States over the past four years. While many hesitated to suggest early on in a Trump presidency that things would devolve into this, by the time federal agents were sent in to occupy Portland, the idea that America was succumbing to fascism no longer seemed so strange.

And President Trump's continual insistence that "Antifa," or, you know, anti-fascists, are the enemy certainly made everything come into focus.

A poster outlining the 14 early warning signs of fascism, as laid out by author and amateur historian Laurence W. Britt back in 2003, used to be available in the gift shop of the Holocaust Museum. The image of it has been making the rounds on Twitter for the last three years, and the obvious comparisons now are almost unbearable.

Every single item on this list can easily be checked off under Trump’s presidency.

His treatment of protestors and immigrants show nothing but disdain for human rights, insisting Democrats are socialists and the enemies of America as a way to unite the right in fear is obvious, as is his rampant sexism both before and during his presidency. “Rampant corruption” needs no explanation, nor does “corporate power protected,” and the GOP’s entire platform focuses on entwining government and religion — specifically, Christianity.

There is some hope left for a semi-fair election, but with all the gerrymandering and attempts at suppression (particularly in terms of this year’s audacious sabotage of the post office), it remains to be seen if that’s possible.

Britt’s list has circulated online for the last several years, as people realized what the United States has been heading towards.

Well. Here we are, America.