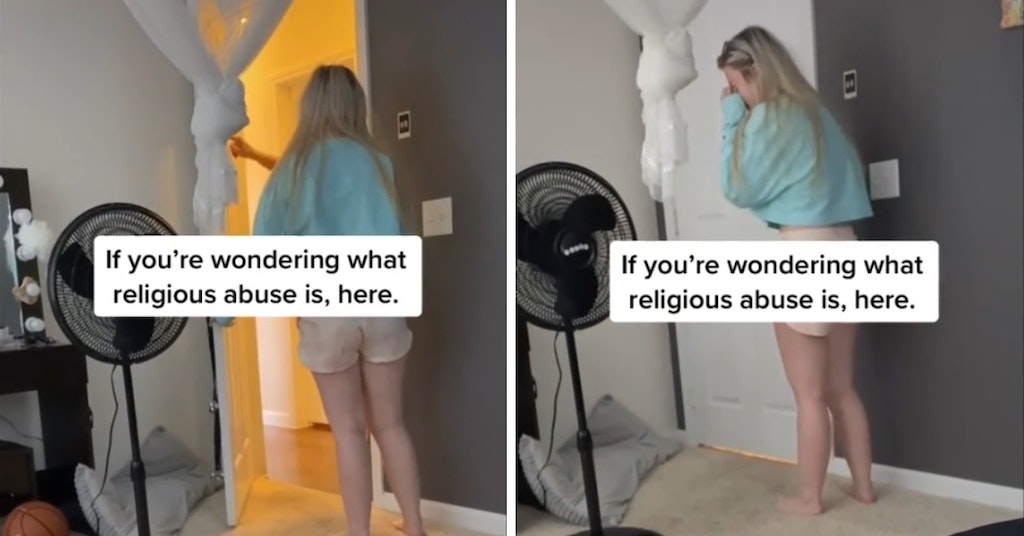 A short TikTok video has gone viral for showing a young teen girl’s mother appearing to conduct on “exorcism” of her daughter’s “demons” through her bedroom doorway before leaving without another word. The video is tagged with “#lgbtq,” so the assumption is that the exorcism was the result of homophobia. Also, TikTok user Selia Brookes describes herself as “gay, gay, gay” in her bio.

“If you’re wondering what religious abuse is, here,” the video caption reads.

The brief video shows the incident filmed from Brookes’ bed, presumably by a friend, as her mother appeals to Jesus.

“Jesus. Thank you Jesus,” her mother says with only her pointing finger visible from the angle. “Demons, foul spirits. Lying spirits. Satan, I rebuke you in the name of Jesus, the name above all names! Praise you, Jesus!”

She then walks away without another word, and Brookes closes the door and starts to either laugh, cry, or both, but as she turns back to the camera is clearly upset.

Unfortunately, homophobia and transphobia are still rampant in the U.S., and many kids have to deal with abusive behavior like this, including from their own parents, if they dare to come out of the closet. Evangelical Christians in particular tend to believe that being gay or trans is a sin or the result of “demons” or whatever.

According to recent surveys, the number of LGBTQ+ people among the youngest generations is significantly higher than in older age groups, which does signal increasing acceptance among the U.S. population, making it easier for young folks to explore their gender and sexuality and feel safe coming out. However, this news has resulted in something of a panic backlash among the intolerant.

A report by the Pew Research Center found that 72 percent of people surveyed in the U.S. feel that “homosexuality should be accepted by society.” While this is a strong majority, that still leaves 28 percent who are clearly homophobic.

In Brooke’s case, it’s bad enough that she tagged her video with “#emancipation” as well as “#abuse,” suggesting that she at least wants to pursue legal avenues to removing her parents’ authority over her.

Brookes appears to be a fairly new user, with the religious abuse video being her first. In spite of being previously unknown, it has gained over 250,000 views in two days and many comments supporting the teen and offering sympathy for her situation.

“There’s no hate like Christian love,” said one commenter.

“That’s why I don’t tolerate Christian anything,” said another. “I just don’t. Too many people use it for a right to harm others.”