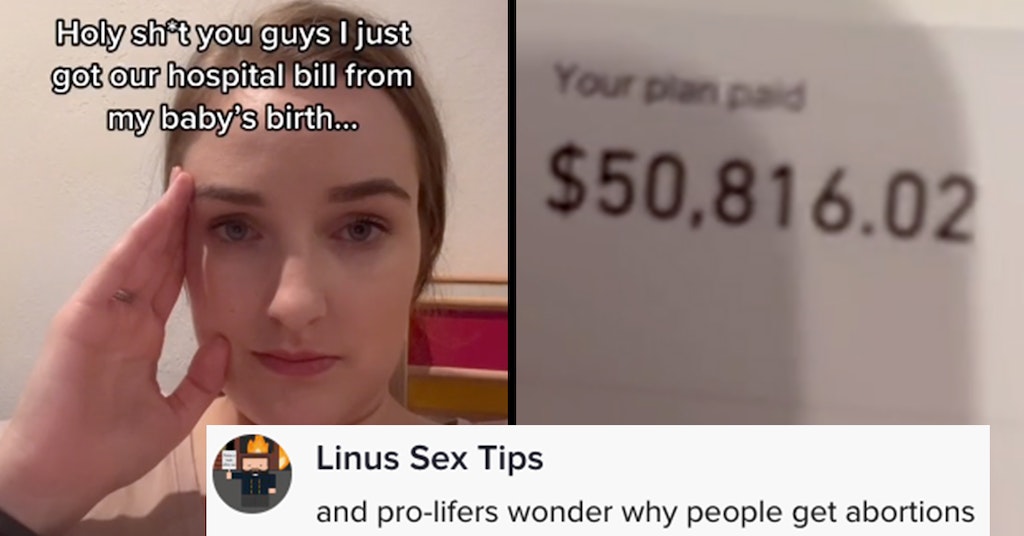 A TikToker’s video showing how much her bill for having a baby at the hospital came out to is reminding everyone that the American healthcare system is deeply broken.

Shannon Mayor (@shannonmayor) sits with a stunned look on her face at the start of the video, underneath text that reads, “Holy sh*t you guys I just got our hospital bill from my baby’s birth…”

The camera then pans across the bill, landing on the total amount that her insurance plan paid: a whopping $50,816.02. Her own personal cost, thankfully, was just $250.00.

Insurance is weird and confusing, and it’s unlikely the total would have come out to as much if she hadn’t had any, but the number is still astronomical for something as normal as having a baby. And having to pay anything with the same number of digits out of pocket sans insurance would be difficult for many.

“I wasn’t expecting the total to be that high,” Mayor herself admitted.

She also explained that her insurance took care of so much of the bill because she had a decent plan through her old employer. Only an estimated 49% of Americans actually have health insurance through work.

Still, viewers of Mayor’s TikTok were outraged at how much the act of giving birth cost.

“So banning abortion but then charging to have the baby…” @aayliahjones wrote.

Another TikToker claimed the bill for their baby came out to “300k after a month stay in the NICU.”

The cost of giving birth to a baby is, of course, only the beginning of a long slew of financial burdens associated with raising a child that tend to run more steep in the United States than in other developed countries. And that’s a big part of why the birth rate continues to decline.