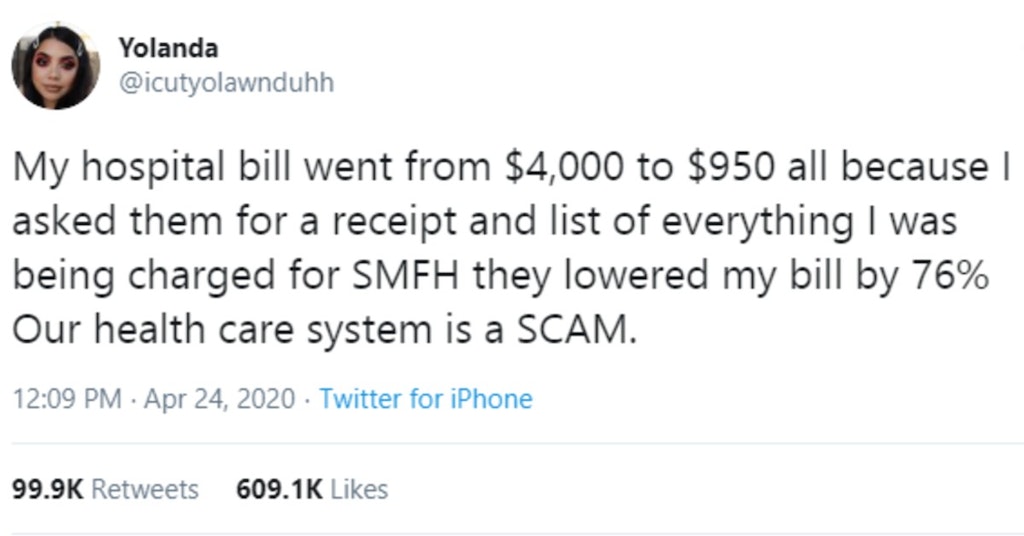 
The United States of America is known for thinking it’s the best in the world while actually being one of the worst under many metrics, and none is quite so glaring as our absurdly broken, haphazard, and expensive healthcare system. It’s even generous to call it a system at this point. It functions as though it’s barely held together by a series of safety pins, twist ties, and pieces of duct tape.

A prime example of this is how, and how much, people are charged for hospital visits, with or without insurance. Perhaps an even better example is how those massive hospital bills everyone complains about can often be drastically reduced simply by pushing back a little.

One Twitter user by the name of Yolanda shared just such an experience in a Friday tweet that has since gone viral with just under 100,000 shares.

My hospital bill went from $4,000 to $950 all because I asked them for a receipt and list of everything I was being charged for SMFH they lowered my bill by 76%
Our health care system is a SCAM.

This bill-slashing event is far from an isolated one. Back in late December 2019, before the coronavirus pandemic had us all stuck at home counting the paint drip spots on our ceilings, one woman made a TikTok video encouraging people to ask for itemized hospital bills because, in her experience, this would reduce her bills by about 25 percent.

Other people who have tried this, like Yolanda, have been blessed with even bigger reductions in their bills, more around the range of 75 percent. According to TikTok user Shaunna Burns, this is because they don’t want you to know about all the “stupid charges” like $37 for a bandaid, so they simply remove them.

This is the Tiktok I saw! I don’t really know if it works for other things but it doesn’t hurt to try! pic.twitter.com/LXXJm4jkYp

Hospitals are allowed to charge pretty much whatever they want and hide those charges unless specifically asked for them. They do so in order to make up for budget shortfalls caused by a barely-functioning healthcare system.

Asking for an itemized bill isn’t guaranteed to result in a bill reduction, but it’s also not the only thing you can try. Other Twitter users have chimed in with methods they used to successfully get their bills slashed to a fraction of what they were before.

Holy shit. I just got a huge ER bill knocked down by SEVENTY PERCENT because I listened to a Tumblr post that said to call and tell them you can't pay that. I know we all know this but truly, America is a SCAM.

One time I received a $450 bill (months after I was at the hospital) that was explained as a fee for a doctor I never saw to “sign off” on the NP’s work. After 10 minutes of arguing the billing person settled for $75.

I got charged over 10 grand when I got shot. I was 18. I never paid it. They stopped calling me. It’s not on my credit report. It vanished.

We literally waited it out for my boyfriend’s bill when he broke his leg…it went from around 14k to 2.5k……….. I guess the free hospital coverage kicked in late?? But like!???! pic.twitter.com/RXYdiqiDvV

Other commenters told their own stories of asking for an itemized bill from hospitals and getting their bills reduced.

Same thing happened to my radiology bill. They put a collection for over $4k. When asked for detailed billing, they cancelled the collection and sent me a bill for $756.00.

The moral of the story is to always push back on U.S. hospital bills—and to fight for universal healthcare.