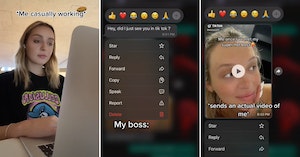 Worker’s Story Of Her Manager Finding Her ‘Hot Boss’ Video Plays Like A Horror Movie, But Gets Better

A TikTok user has gone viral for a finely crafted video telling the story of how her supervisor confronted her about another video she made about her “super hot boss,” using intense music complete with heartbeat drums as the horror unfolds.

Her boss somehow came upon this original TikTok, now deleted as requested, and messaged her about it, resulting in a period of high anxiety as the worker waited to see how he would react.

Office romances can often be tricky, and that goes double for any relationship between a superior and an underling. Often a romance like this would be against the rules, and there was a chance that this manager would consider the video to be sexual harassment.

That explains this worker’s terror upon receiving a message from her boss asking about the video.

“Hi, what do you mean?” says the TikTok user, feigning ignorance.

The manager then sent her a link to her own video, with the preview showing her face with overlay text that is rather incriminating.

“Me once I’ve met my super hot boss.”

The video ends with a screenshot of an alert that she’s been invited to a meeting that includes herself and said hot boss as the music swells yet further.

Luckily for this TikToker, it appears that the attraction may be mutual. She has so far posted multiple follow-up videos suggesting that there is a budding romance afoot. In part two, she confirms that she was not fired — in fact, they went on a lunch together.

You may be disappointed to find that hot boss’s face wasn’t shown, but get a load of that wrist.

Further updates continue to suggest that they may be dating, with the next saying that they would be “seeing each other” the following day and that he’s been giving her hugs at the end of the day. The latest update reports another meal outing, but that hot boss was going away for a while.

“We grabbed some food and worked for a bit on Saturday,” the text reads. “Later we went for dinner and our colleagues joined us, since then he’s away (business trip) and I’m spending my days in the office. He will come back later this week and we’ll see how it goes.”

Other TikTok users have been cheering on these two in the comments, with some saying that this story is evolving into something better than any movie they’ve seen.

“This is the makings of a tiktok love story and I am here for it,” wrote one commenter.

“Please write a book, this is book material!” begged another.