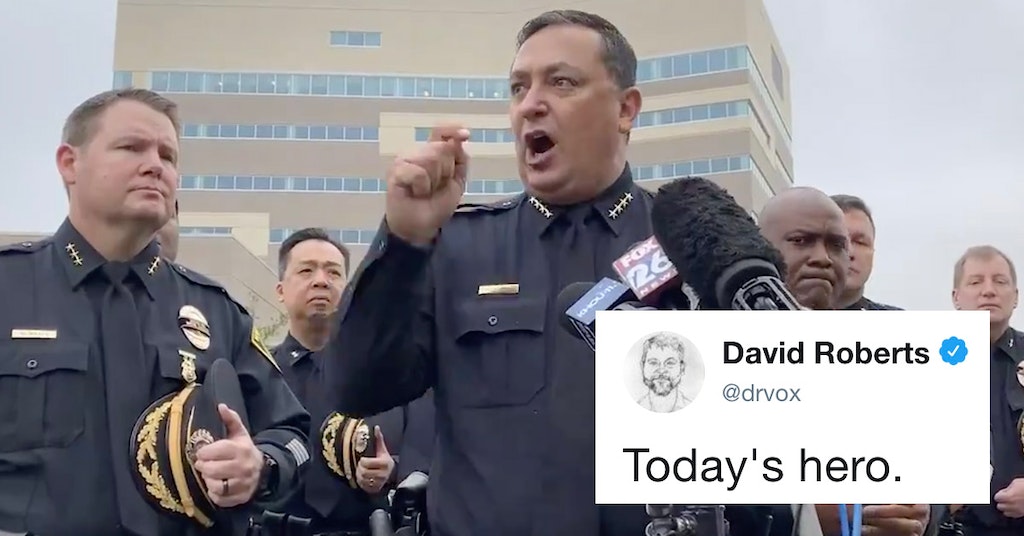 “Whose Side Are You On?”—Houston Police Chief Slams Ted Cruz, GOP For Not Renewing Violence Against Women Act

Houston Police Chief Art Acevedo had some strong words for Texas Republican senators such as Ted Cruz and John Cornyn and Senate Majority Leader Mitch McConnell, accusing them of seeming to care more about the National Rifle Association than gun violence victims.

"And who killed our Sgt? A boyfriend abusing his girlfriend. So you're either here for women and children [daughters, sisters] and our aunts, or you're here for the NRA." pic.twitter.com/L6UDbZZvku

“I don’t want to see their little smug faces [talking] about how much they care about law enforcement when I’m burying a sergeant because they don’t want to piss off the NRA,” Acevedo said after the shooting of Police Sgt. Christopher Brewster.

This is leadership on gun violence. https://t.co/JMIE0hPhka

“Make up your minds. Whose side are you on? Gun manufacturers, the gun lobby—or the children that are getting gunned down in this country every single day?”

Sgt. Brewster was allegedly killed by an armed, abusive boyfriend of a woman when Brewster responded to a domestic violence call.

The Senate hasn’t renewed the federal Violence Against Women Act, a fact that makes Acevedo particularly irate. Federal law currently prohibits felons and domestic abusers living with their victims from buying guns, but dating partners who are abusive and live elsewhere can still purchase firearms.

Acevedo said the bill is stalled because “the NRA doesn’t like the fact that we want to take firearms out of the hands of boyfriends that abuse their girlfriends.”

“You’re either here for women and children and our daughters and our sisters and our aunts, or you’re here for the NRA,” he said.

Last week, Cornyn tweeted to Acevedo that Democrats were to blame for the stalled bill because they were too busy with “impeachment mania.”

Acevedo wrote, “it is past time for @senatemajldr, @JohnCornyn & @tedcruz to lead & get the Violence Against Women Act to @realDonaldTrump. Lives are being lost & destroyed due to inaction. Lock yourselves in a room & don’t come out until you hatch it out. LE will gladly help.”

Unfortunately, important legislation like this has fallen casualty to impeachment mania. We will keep trying to pass a bipartisan bill but it takes two (parties) to tango https://t.co/Qr3NcTOzM3

According to the CDC, in 2017, which is the most recent year for which complete data is available, 39,773 people died from gun-related injuries in the United States. And according to a recent study by Northeastern University criminologist James Alan Fox, homicide among domestic partners is on the rise after almost four decades of decline. The driving factor? Gun violence.

Let’s listen to Chief Acevedo and other gun control advocates and, more than ever, push for gun reform and policies that will make it harder for domestic abusers to access firearms.