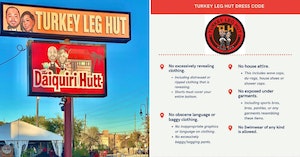 Photo via The Turkey Leg Hut/Facebook

‘We Are Not A Club’⁠—Houston Restaurant Updates Dress Code Policy, Launching Debate

A restaurant’s Facebook post announcing a stricter dress code policy for their patrons gained a likely unexpected amount of attention, getting thousands of comments as people argued over the details of the new rules. Last summer, The Turkey Leg Hut, a Black-owned restaurant in Houston, Texas that specializes in stuffed turkey legs, revealed to customers that they were banning certain types of clothing, noting that they are a family-friendly environment.

“Please know that we are a family friendly restaurant that serves all ages from children to adults daily and putting this dress code in place was necessary to ensure that all parties from our guests to our staff are dressed appropriately when in our establishment,” they wrote on Facebook.

“Unfortunately, due to the attire of some guests, we were forced to put this new policy in place as we remain committed to ensuring all guests are comfortable while visiting us,” the post continued. “We are not a club, we are a family friendly restaurant and will continue to maintain our standards as we welcome everyone to the Turkey Leg Hut!”

The dress code mainly focused on attire that could be viewed as sexual in nature, described as “revealing,” including shorts that don’t cover people’s entire butts, swimwear, and anything that shows your undergarments. Also banned was graphic shirts with swear words or images deemed “inappropriate,” baggy or sagging pants, and “house attire.”

Many commenters were supportive of the dress code, either because they feel that private businesses have a right to set the rules they want or because they support people generally wearing clothing they consider to be “modest.” The latter type of commenter tended to lean toward a specific religion, as you might have guessed.

“What a world we live in now, where it has to be explained what is appropriate and inappropriate dress,” wrote one such commenter. “Descent, modest and what’s fit for the occasion has gone by the wayside. But this is what happens when a nation rejects the ways, and absolutes of God.”

However, others who say that they have been loyal customers of The Turkey Leg Hut expressed surprise and confusion over the change, saying that it was the owners who cultivated a club-like atmosphere and are now turning on the people who make the place a success. Although the owners are Black themselves, it didn’t escape people that an entire section of the dress code banned non-sexualized dress items that are a common part of Black culture.

“Y’all established yourselves as a place of business that partakes in trap music, hookahs, mixed drinks, etc but all of a sudden, y’all are above the crowd that made your establishment popular?” complained one customer. “What #ffffff person complained to y’all because they seen an a** bigger than theirs, looking better in some shorts?”

For those who don’t know, #FFFFFF is a hex color code used to produce the color white on graphics programs.

Others opined that the business owners have a right to implement a dress code if they want, but should have thought it through a long time ago rather than upsetting customers by suddenly changing the establishment’s atmosphere. One fellow business owner suggested that the family-friendly rules could only apply during certain times of the day.

“I’m not opposing to the dress code, but this should have been established at the beginning,” she said. “So being that it is so late in the game, they could have (like some I know), put a time change in place. In other words, ‘Starting at 7:00p.m. Adults Only Vibe from 7:00p.m. till Closing.'”

There doesn’t appear to be any information about this dress code on The Turkey Leg Hut’s website, and it’s unclear if they ended up keeping these rules in spite of complaints. Either way, they’re still in operation and were posting on Facebook as recently as last week.