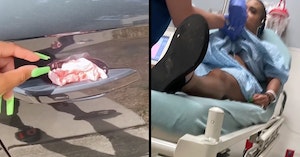 A Houston woman’s claim that she was poisoned by a napkin has some people seriously freaked out — and others skeptical.

Erin Mims was in the process of celebrating her birthday when she says she went to her car and discovered a napkin wedged into her door handle.

“When I saw it, I picked it up with my fingernails…and I tossed it out,” she recalled in a video shared to Facebook. “I didn’t touch the napkin, but guess what? I still opened the door with my fingertips.”

Initially thinking that perhaps her husband had put it there as a weird joke, Mims says after she confirmed with him that that was not the case, she went back into the restaurant they had just come out of to wash her hands.

“I went inside, washed my hands, and maybe like two minutes later, my fingertips started tingling,” she said.

The feeling spread to the rest of her body, and additional symptoms like feeling hot and not being able to breathe resulted in Mims’ husband driving her to the hospital. She was given fluids while doctors ran tests over the course of a six and a half hour visit, ultimately telling her that she had “acute poisoning from an unknown substance,” she says.

Mims shared her story to warn others, and added that her doctor suggested it sounded like a possible kidnapping attempt.

“Just imagine if I would have grabbed it with my full hand. Like, I probably could have been dead,” she said. “So I’m just recording this to let y’all know, be careful.”

Many Facebook commenters expressed empathy and concern over what was clearly a harrowing experience for Mims.

But others were much more skeptical about the story, even drawing comparisons to the various stories about police officers allegedly overdosing on fentanyl after brief exposure to the drug — something that isn’t really possible — that have been reported on uncritically by local media in recent years. (Snopes concluded: “Without a full, conclusive investigation conducted by police, we are unable to confirm or deny exactly what contributed to Mims’ hospitalization.”)

Still, Mims filed a report with the Houston Police Department. Both HPD and the Houston DEA office said they have not heard of anything similar happening in the area before.