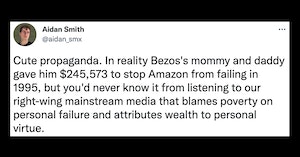 Viral Twitter Thread Shows How Billionaires Really Got Their Start

The ultra-wealthy often love to pretend that they are self-made. Maybe it makes them feel better about squandering wealth while others who work hard continue to financially struggle. Maybe they need to believe that their success is purely because of their own virtue. Maybe they’re just stories we circulate among ourselves to buy into the lie that anyone, ANYONE, can find insane success if they’re “good” enough.

But in reality, just about every billionaire had some massive leg up early in their career that ultimately set them on the path to their extreme wealth, and that wouldn’t have been available if wealth and connections hadn’t already been in their lives.

Last year, @aidan_smx posted a Twitter thread exposing the real histories of billionaires rather than these plucky bootstrap stories we usually hear.

He started with Jeff Bezos, founder of Amazon.

Then there was Bill Gates, whose family was well-connected.

Before Mark Zuckerberg created the social network site that’s done wonders towards destroying the United States, he had wealthy parents who could afford extra for his education.

But others praised the transparency and suggested it’s important to understand where the wealthy come from if we’re ever truly going to address class inequality and strive for better, rather than treat being poor as a moral failing.

If we need to pretend billionaires started from nothing in order to find their success inspirational, there’s definitely a problem. Perhaps if they ran companies that paid all employees enough money to where they could provide a stable home for their own children, who would then be just as capable of pursuing their own brilliant business ideas with a financial safety net, successful people wouldn’t feel the need to craft a lie of making it all on their own.

But if billionaires ran companies that paid employees fairly, they probably wouldn’t have ever become billionaires at all.