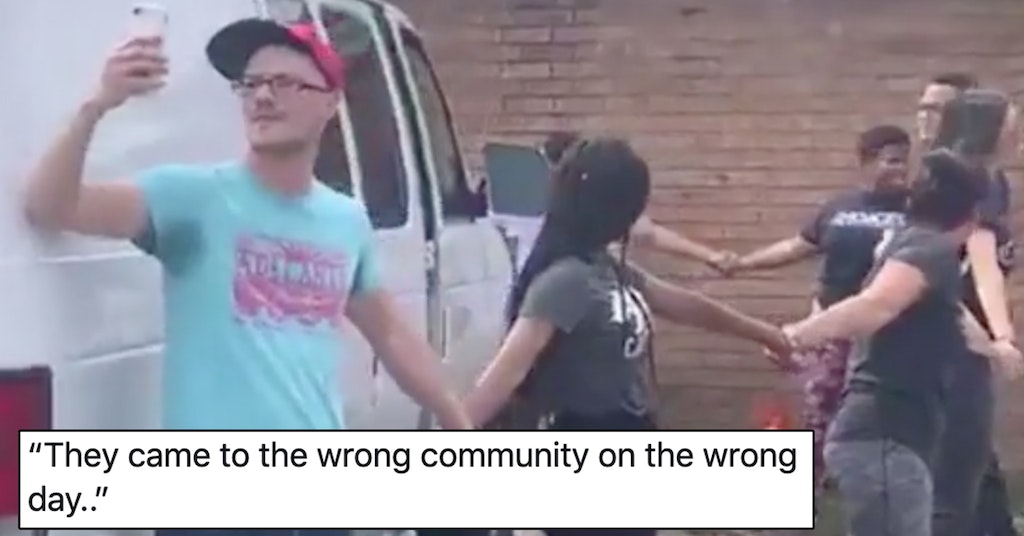 Everybody’s getting emotional over the trailers for A Beautiful Day in the Neighborhood, but something really beautiful happened in a Nashville, Tennessee neighborhood on Monday: neighbors banding together to save a father from being taken into custody by ICE.

In an attempt to help the man, who has not been named, and his 12-year-old son get back into their home, neighborhood residents formed a human chain around the house, causing an hours-long standoff with an ICE agent and officers from the Metro Nashville Police Department.

“They don’t bother anybody. Our kids play with their kids. It’s just one big community. And we don’t want to see anything happen to them,” neighbor Andrea Glass said.

The father and son were parked in their driveway when an ICE agent blocked them in with his truck. Neighbors had seen the unmarked truck in the neighborhood over the past two weeks, but didn’t know it was an ICE vehicle.

While the two stayed inside their truck, some neighbors brought them food and water. Other neighbors continued to fill the car’s tank with gas so they could keep the air conditioner running.

Neighbor Stacy Farley said the ICE agent offered the two cash if they left the truck, saying they would “have to exit eventually.”

The father and son remained in the truck for hours. When they finally exited the car, neighbors encircled them, allowing the two to get inside their home.

In an interview with the Tennessean, Metro Nashville Police Department Sgt. Noah Smith said that the department didn’t have any outstanding warrants on the man and that officers were there in case anything “got out of hand.”

Nashville city policy does not allow police to assist in ICE operations unless they have a warrant.

The Tennessee Immigrant & Refugee Rights Coalition posted a statement on their website detailing what they learned from the incident:

“What happened this morning shows how deeply rooted immigrants are in our community. Neighbors reported that they were worried and outraged because some had known the family for more than a decade […] When multiple law enforcement vehicles surround a home and conduct this kind of operation it can be deeply traumatizing, not only for the young boy in the vehicle, but for the entire community.”

“They came to the wrong community on the wrong day..”

Nashville showed what’s possible in an organized community: immigrant families can exercise their rights and their neighbors can help them to defend their rights. https://t.co/oGTvB4fn65

Social media users were inspired by the story of neighbors pitching in to help save a family from being torn apart.

When neighbors & community members in Nashville, Tennessee found out that ICE was conducting a raid in their community they rallied to help a father and his son avoid the ICE agents by forming a human chain to block them.

This is the America we need.pic.twitter.com/jbD6ionFfc

Amid the horror of this — the ICE officers *beseiged* this family, trapping them in a van for 4 hours, lying to them the whole while — there is humanity. Neighbors helping neighbors. Standing up to these thugs. #AbolishICE https://t.co/hyghmOqt7k

This is how to be a good neighbor. Amazing