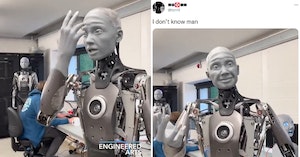 A brief video released Wednesday by U.K. tech company Engineered Arts is making a whole lot of people rather uneasy for its display of a “humanoid robot” able to produce hyper-realistic facial expressions displaying complex emotions like wonder and curiosity. The robot, named Ameca, is shown seeming to “wake up” and express surprise at its surroundings before examining its own arms and hands, then seems to notice the person filming before extending its hand to them and smiling.

The YouTube video made its way to Twitter, where people widely found themselves plunged into the depths of the uncanny valley and/or having flashbacks from a specific Will Smith movie.

“First look at Ameca, most advanced humanoid robot from @Engineered Arts Designed as a platform for AI and human robot interaction (HRI),” the company wrote in the video description.

Thanks in part to many pieces of science fiction, the majority of Twitter users expressed unease on some level, suggesting that this is yet another step toward the AI/robot apocalypse scenario. Engineered Arts specializes in artificial intelligence, which some have warned could pose a potential threat to humanity, though that will of course depend on whether our future robot overlords decide we deserve to live.

Names ranging from ICE T to an actual writer for the current Terminator TV series responded, with a few trending more positive and logical while others were basically just screaming. Here’s a fresh batch of reactions to browse before Ameca enslaves us all.