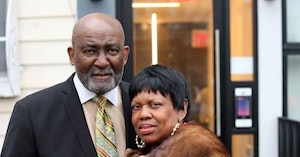 This week, one of the most remarkable stories yet was shared on HoNY’s social media. It’s the wild ride no one saw coming—so buckle in.

At the start of the 11-part series, a woman named Cheryl Love recounts how five years ago, she and her husband Bobby were starting their day as usual when twelve police officers barged into their home.

“They went straight back to the bedroom, and walked up to Bobby,” she says. “I heard them ask: ‘What’s your name?’ And he said, ‘Bobby Love.’ Then they said, ‘No. What’s your real name?’ And I heard him say something real low. And they responded: ‘You’ve had a long run.’”

Cheryl was flabbergasted as they put her husband of forty years in handcuffs. “And he tells me: ‘This goes way back, Cheryl. Back before I met you. Way back to North Carolina.’”

Bobby takes over telling the story from there, admitting that his name wasn’t always Bobby Love. Before he was Bobby, he was Walter Miller.

Walter Miller began getting into trouble as a teenager. It started with a simple arrest for “disorderly conduct” in 1964 North Carolina as a 14-year old. From there, he recalls, it spiraled into theft, and Walter eventually got shipped off to juvie.

“I hated everything about that place. The food was terrible. The kids were violent. I still have scars from all the times I got beat up. Every night, while I was falling asleep, I could hear the whistle of a freight train in the distance. And I always wanted to know where that train was going. So one night, when the guard turned his back to check the clock, I ran out the back door– toward the sound of that whistle. And that was the first place I ever escaped from.”

Things started looking up for Walter after that, but then he fell in with a bad crowd.

“These guys were robbing banks—and getting away with it. So I decided to tag along,” he says. “And we got away with it a few times. After every score, we’d hang out on the strip at 14th and T, and act like big timers. We felt like gangsters. I have nobody to blame but myself. I just enjoyed the feeling of having money.”

But eventually, the other shoe dropped, and Walter was not only caught, but woke up in the hospital after being shot by the police during a robbery gone wrong.

“It was all over for Walter Miller,” he says.

He was sentenced to 25-30 years in prison. After displaying good behavior, he was moved from a maximum-security prison to a minimum-security facility and fell into a routine that he said left him feeling “relaxed.” But when another inmate yelled at the prison captain and Walter wound up taking the blame for it, everything shifted.

“After that he started picking on me,” he recalls. “I tried to keep my head low. But the more I tried to do good, the more I got punished.”

Walter says he was one unearned negative mark away from being shipped back up to the maximum security prison when he was put on highway clean up duty, the worst job you could get. That, he says, is when he decided he was going to escape.

He memorized the bus routes and devised a plan.

One of the guards didn’t search the prisoners as the entered the bus, so one day, Walter wore the civilian clothes he was allowed for his other job working at the radio station on underneath his prison uniform. He walked to the back row of the bus and waited for the intersection stop he knew was coming — one right next to a densely wooded area he knew he could bolt towards before anyone could stop him.

“As we slowed down for a stop, I swung open the back door– and I was gone. I could hear the alarm blaring behind me, but I didn’t look back. I peeled off my green clothes and just kept running.”

“Every time I passed a brother, I asked for directions to the Greyhound station. Everyone kept telling me: ‘Keep going, keep going, keep going.’ When I finally got there, I found a brother in the parking lot who agreed to buy me a one way ticket to New York. I waited until the last minute. I jumped on the bus right as the driver was closing the door. Then I slunk down in my seat while we drove out of Raleigh. Once we got on the highway, the girl next to me started making small talk. She asked me my name. I thought for a moment, and said: ‘Bobby Love.’ And that was the death of Walter Miller.”

But upon arriving in New York, Walter — now Bobby — had nothing.

“I had to figure out a way to get a foothold in life. I wasn’t even a person. I had no papers, no ID, no nothing,” he says.

“Believe it or not, the first thing I got was a social security number. I walked up to the window and told the lady a story about losing everything, and she gave me a card. On the spot. I still have it today. Next I got hold of an original birth certificate, scratched out the name, and typed ‘Bobby Love’ on the line. Then I took it to a print shop and copied it so many times that it didn’t look fake anymore. It didn’t take me long to find a brother at the funeral home who agreed to notarize it. He wouldn’t sign it, but he’d stamp it. And that was enough for me– because I found a brother at the DMV who pretended not to notice. And that’s how I got my drivers license. Then I used all my new papers to get a job working in the cafeteria of the Baptist Medical Center. And that’s where I met Cheryl.”

“Cheryl was innocent. The opposite of me.”

Bobby admits he never told her anything about who he was, just that he’d come to New York City to “try something new,” which was the truth. They married in 1985, and raised four children together, but Bobby says that his whole time, his family in North Carolina was pressuring him to tell Cheryl who he really was.

“But they didn’t know my wife. Not like I did. Cheryl is a righteous woman,” he says. “And that’s not the kind of woman who could keep a secret like this. I’m not trying to say that she’d have called the cops on me. But she’d have made me call the cops on myself.”

And the new life Bobby had forged for himself was a clean one, a good one. He was doing everything right. So he kept his secret past to himself.

But Cheryl says she always knew something was wrong.

“There was a piece missing,” she says now. “All these years I loved my husband. And he loved me—but something was missing.”

She recalls how he never liked to be photographed, and always seemed paranoid, and it was difficult to get close to him. Sometimes it made Cheryl wonder if he didn’t want to be with her, but he was always there, always providing, so she chalked it up to a difference in upbringings and tried to carry on.

“But it was hard. It wore me down. I cried so many tears about it. I remember during Christmas of 2014, I was on my knees in church, saying: ‘Lord, please, I can’t do this anymore.’ I begged God to change my husband’s heart. I’d reached the end of my rope. That was a few weeks before everything went down.”

“My world came crashing down.”

Cheryl says that when Bobby was arrested, nobody in their lives could believe that she had truly been in the dark for forty years of marriage.

“How could I be so stupid?” she asks. “I wanted to hide. I wanted to disappear.”

But she credits the fact that even through feeling so embarrassed and betrayed, all she really wanted to do was comfort him with making her realize that she really did love him.

“When I first visited him in prison, he broke down crying. His head was in his hands, and he told me: ‘I know, you’re going to leave me.’ I told him: ‘No Bobby Love, I married you for better or for worse. And right now this is the worst.’”

So Cheryl figured out how to get her husband back.

She gathered testimonials from everyone they knew. She wrote the governor, she wrote Obama, she spoke to the parole board on his behalf.

“I didn’t know a thing about Walter Miller,” she says. “But I told them all about Bobby Love.”

“After a year in prison, they let him come home. The day after he was set free, I sat him down and asked: ‘What is it? Are we the Loves? Or are we the Millers?’ And he said: ‘We Love. We Love.’ So I had him change his name legally. And now we’re moving on.”

It’s not all smooth sailing, but they’re putting the pieces back together.

“I still have my resentments. When we get in a fight, I’ll think: ‘This man better appreciate that I forgave him.’ But the thing is– I did forgive him. And when I made that decision, I had to accept all the territory that came with it. I can’t make him feel that debt every day of his life. Because that’s not the marriage I want to be in. The whole world knows now. We’ve got no secrets. But I think this whole mess was for the better of things: better for me, better for the kids, and better for Bobby. He doesn’t have to hide anymore. He can look at me when I’m speaking. Not only that, he’s hearing me too. My voice is heard. I used to walk on eggshells. I used to just go along. But I told him one thing. I said: ‘Bobby, I’ll take you back. But I’m not taking a backseat to you no more.’ Because I got my own story to tell. I can write a book too. I might not have escaped from prison, and started a whole new life, and hid it from my family. But I forgave the man who did.”