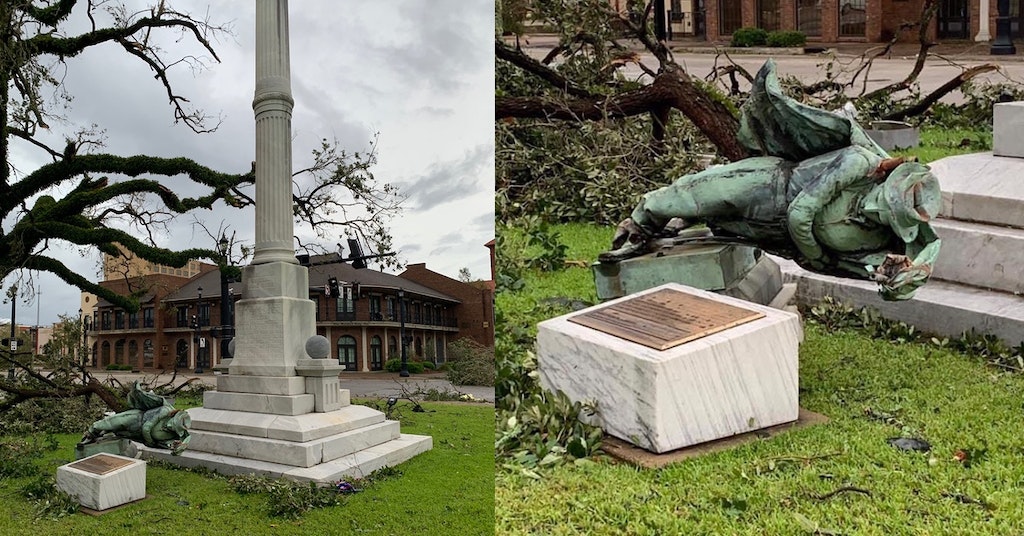 
Only two weeks after officials in Lake Charles, Louisiana voted not to remove a Confederate statue upon the request of local residents, Hurricane Laura swept through the city with different plans.

The South’s Defenders Monument had been the subject of heated debate in recent weeks. Some residents wanted it removed from its prominent position in front of the local courthouse, while others insisted that monuments to the Confederacy are important pillars of history rather than celebratory reminders of slavery.

When the Calcasieu Parish Police Jury voted against removal earlier this month, they thought that was the end of the matter for the time being.

But after Hurricane Laura blew through Louisiana, the 105-year-old statue fell.

Considering how often some folks treat natural disasters as “punishment” for the wrongdoing of sinful people, those who wanted the statue removed couldn’t help but point out that one could say the same about the toppling of the South’s Defenders Monument.

The destruction left in the wake of Hurricane Laura has been devastating to communities across Louisiana, including Lake Charles, and it’s important not to lose sight of that. But in this one specific instance, some folks feel like the storm did something right.

Maybe all the other local governments refusing to take down their odes to the Confederacy and the pro-slavery movement should take a hint.