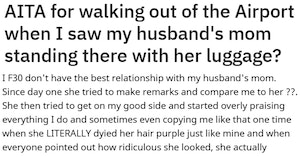 In a particularly clear case of someone not being “the a–hole” on everyone’s favorite drama-filled Reddit forum, an unfortunate woman asked if she was in the wrong for walking right out of the airport when she found out her mother-in-law was coming on her vacation. It might sound harsh at first, but the further you get into the details, the more it becomes clear that the Reddit user should have run all the way to a divorce attorney’s office.

The post, which has blown up since just yesterday, describes the woman’s fraught relationship with a mother-in-law who seems like she’s never even heard of the concept of personal boundaries.

The OP started with a perfect example of the MIL’s strange behavior, including the time “she LITERALLY dyied [sic] her hair purple just like mine and when everyone pointed out how ridiculous she looked, she actually blamed me and accused me of trying to make a joke out of her.”

Then the OP and her husband decided to plan a vacation. From the get-go, her MIL tried to force her way into this vacation and would not take no for an answer. It got to the point that she even threatened to make a fake report to the police to stop the vacation from happening at all if she wasn’t allowed to tag along.

“My husband’s mom wanted to come along and threw temper tantrums when I said no. She called, texted, sent people to talk to me into letting her come, even threatened to call the police and make some complaint up to get us to stay if she can’t come.”

The divorce attorney comes in at the point where the OP says her husband was actually taking his mother’s side, even threatening to stay home himself if she wasn’t coming. That was the wrong move to make on his part.

“My husband said we should just take her but I told him he was wrong to tell her about the trip in the first place. He gave me an ultimatim [sic]. said he wouldn’t go if she can’t come and I told him I’d gladly call his bluff which made him take his words back and say ‘FINE! I will tell her to stop it because we won’t take her.'”

Unfortunately, that was not the end of it. Her husband lied to her, booked his mother’s ticket behind his wife’s back, and then roped the entire family into freaking out on her when she refused to be strong-armed into a vacation that no one would want.

“He lead me to the waiting area and first thing I saw was his mom standing there with her luggage. I froze in my spot, I felt a cold wave washing over me and I was fuming inside. She and my husband were hugging that’s when I quietly turned around and started walking towards the exit. My husband followed me while shouting at me to stop. he tried to stop me but I told him off the harshest way possible.”

This kicked off accusations that the OP was “overreacting,” a classic, then called her “pathetic” and “spiteful” and said she was being “ridiculous.”

The OP was resoundingly voted “not the a–hole” in this situation, and commenters are widely dropping the D-word.